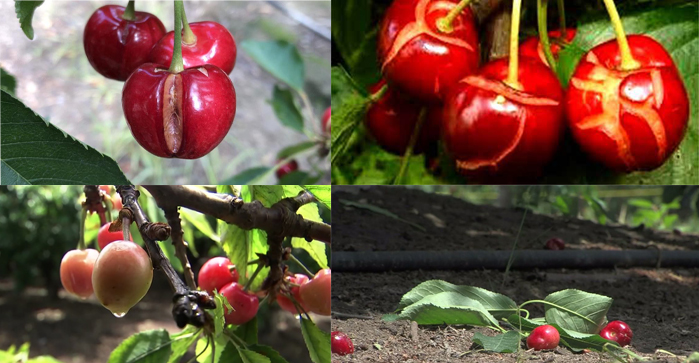 The crop was originally estimated at 10 million, 18-pound boxes with many in the industry expecting it could reach 12 million boxes.

The “atmospheric river” that kept the storms flowing through California all winter long is extending through May, much to the consternation of the state’s cherry growers, who are seeing huge losses on early varieties. As the cherries near harvest, they are easily damaged by rainwater, which seeps under the skin, swelling the fruit and causing it to split.

“The early-season varieties were just getting going (into peak harvest), the ‘Brooks’ and ‘Corals’ especially, and they’ve just been devastated,” Tom Valenzuela, Sales Director of Sunriver Sales in Visalia, CA, said Tuesday afternoon. “And it looks like more rain later today or tonight.”

More rain at this point — nearly two months past the normal end of the rainy season — is really going to hurt. The state has two to five times more precipitation than is normal for this point in May, according to the National Weather Service. A weekend storm broke a 130-year-old tally for May rainfall in downtown Sacramento. By Sunday — with 12 days left in the month and more rain in the forecast — the downtown area had received 3.28 inches of rain, surpassing the previous monthly record set in 1889. The average rainfall for May in downtown Sacramento is 0.76 inches.