For the sixth year in a row, Spanish exports of tomato pastes recorded a notable increase last year, both in terms of quantity and in terms of value. The previous marketing year (2017/2018) finished on a result of 372 551 metric tonnes (mT) exported, which is 16% up on results of the previous marketing year (321 082 mT) and 20% up on the average of the three previous years (2014/2015, 2015/2016 and 2016/2017). This performance is exceptional, all the more so for the fact that it adds a further step to a growth pattern that is already remarkable, with an average annual growth rate of close on 11% over the past six marketing years. With this new development, the Spanish industry has taken the average annual growth rate of exports in this sector to more than 8% over the past two decades. 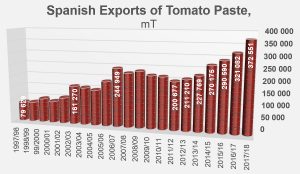 The mainly European outlets determined by geographical location remain a major feature of Spanish export operations, although efforts are clearly being made to develop paste sales on other markets. Since the end of the 10-year period running 2000-2010, during which the European markets (Community and non-Community) absorbed as much as 94% of Spanish tomato paste sales, the share of foreign markets, notably several countries of the Far East, the Middle East and Mediterranean Africa, has tended to increase. The progression margin remains sizable, but it should be noted that the Spanish paste production industry used 58 400 tonnes for manufacturing products for its sales «outside of Europe» in 2017/2018, which is close on 14% of total exports for this sector.

Spanish exports are clearly focused on the surrounding European markets

Conversely, the Spanish industry recorded excellent results for its prime markets, with its sales to countries of the EU. Among the countries of the eastern part of the European Community (previously EU13), Poland and the Baltic countries, which are traditionally among the top buyers of Spanish products, have developed their supply volumes in recent years, meaning that exports toward this region increased in 2017/2018 by more than 7 100 mT compared to the previous marketing year (+39%, from 18 500 mT to 25 600 mT).

Globally, Spanish operators improved their results in terms of quantity by close on 51 500 mT over the marketing year 2017/2018, of which 40 000 mT just to destinations within the European Community (more than 32 800 mT for western countries of the EU and 7 100 mT for countries of eastern EU). The growth in volume has mainly been supported by the development of foreign sales of pastes under codes 20029091 and 20029099 (more than 30°Brix, in industrial bulk conditioning or in retail packs), which accounted for three-quarters of the volumes used over the past three marketing years (see infographics at the end of this article).

The reward that has crowned the success achieved in terms of quantities nonetheless comes at a price. The various boosts recorded by exports over the past 20 years have clearly been based on drastic drops in the prices of paste being offered on foreign markets. Conversely, price increases have closely matched notable slowdowns in foreign operations. In the final count, revenue from exports has grown at an annual rate that is slower than the growth rate of volumes, at about 10% over the past six years, whereas quantities have increased at an average of 11% per year. And the average indicative price for a tonne of paste has, in fact, fallen back at an average rate of 1.1% approximately per year over the past six years (see infographics at the end of this article).

Final results indicate that the value of Spanish paste exports amounted to more than EUR 304 million in 2017/2018 (the equivalent of USD 363 million), an increase of 7% compared to 2016/2017 results (EUR 285 million) and of 9% compared to average results over the past three marketing years (EUR 278 million). Due to the big drop in value of exported products, the progression of turnover results has been far slower than that of quantities.

But on a nationwide scale, it has helped support a fragile increase in the total turnover for exports of the «tomato products» sector, which has been pulled down by a succession of mediocre results for the sauces category and, even more so, for the canned tomato category.