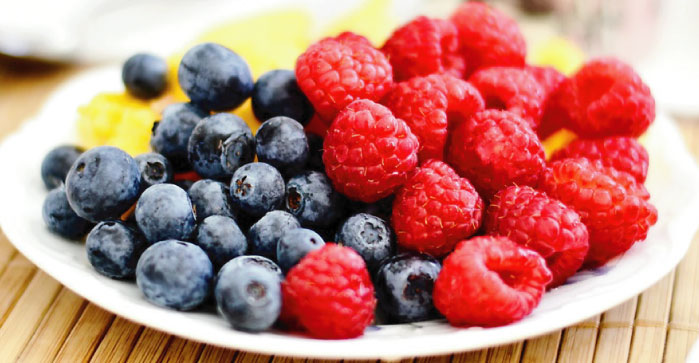 LYNDEN — Blueberry production is overtaking that of signature raspberries in Whatcom County.

Granted, a late-June “heat dome” of 100-plus temperatures especially hit hard at the start of the raspberry harvest this year, but the trend of new plantings in blueberries is making that crop surge both locally and across Washington State.

Local raspberry production was down to 44.5 million pounds in 2021 while the yield in blueberries topped 76 million pounds, according to reports presented by the grower commissions at annual meetings during the 2021 Small Fruit Conference at the Northwest Washington Fairgrounds Dec. 1-2.

Some farms grow both blueberries and raspberries, and the number of acres in each type of berry is about 8,000.

Among blueberry growing states or regions, only British Columbia produced more than Washington, in which Whatcom is the leading county, reported Alan Schreiber, head of the Washington Blueberry Commission. In last summer’s heat he was prepared to adjust down the expected volume, but then in the end state production numbers stayed high and will top 160 million pounds when all is accounted for, he said.

“So much good fruit is coming on,” Schreiber said.

The record-setting three days of heat June 26-28 did affect blueberries as well. “I could go into any field of Whatcom and find damage. Up by Sumas was the epicenter,” Schreiber said.

It remains to be seen now what damage could be significant in berry fields from being covered with water at the worst of Whatcom County flooding on Nov. 15, he said.

To sell all the blueberries being produced, both the Pacific Northwest and the U.S. Highbush Blueberry Council need to push to get into very populous markets in southeast Asia and India, Schreiber said. “There is no doubt in my mind that we could put every blueberry produced in Washington state in Asia,” he said.

Jon Maberry, board president, opened the Washington Red Raspberry Commission meeting at 8 a.m. Wednesday saying “lots of challenges” face the industry. However, market price is a bright spot and Maberry said he hopes that pattern can continue for a few more years.

The prices for all three grades of raspberries — juice, puree and IQF (individually quick frozen) — are at their highest levels ever at $2 per pound or more, according to years of record-keeping by the commission.

Price has often been under a dollar a pound, not profitable for growers. The last truly outstanding year was 2008, with all grades at $1.70 or higher, plus somewhat strong years in 2014 and 2015.

Maberry said the commission feels it got helpful data from hiring a Washington, D.C., law firm to look into “fair trade” raspberry imports into the United States. The public results are a U.S. International Trade Commission 314-page report released in July (www.usitc.gov/publications/332/pub5194.pdf) detailing the effects of Chilean, Serbian and Mexican raspberry imports.

One ITC finding, using an economic model, is that American domestic prices and production of non-IQF raspberries suffered as a result of high levels of imports in the years 2015 through 2020.

“It let other countries know that we are willing to fight for our industry — that’s the important piece of it,” said WRRC board member Brad Rader later about the ITC investigation. “We’ll see where we go from here.”

Megan Lacy, with the Wild Hive marketing firm, highlighted food service trends and opportunities that could bear fruit for sales of Washington red raspberries. Bakers in particular are discovering how to work the raspberry flavor into their creations. Rubicon Bakers of California is one example.

It now helps that the Washington Red Raspberries branding is visible on all products in a warehouse or freezer. As she herself has gotten to know the raspberry growing industry of Whatcom County, Lacy says “people love to learn what you do and why you do it.”

Approximately 85% of North America’s red raspberries for the frozen market are grown within a 15-mile radius of Lynden, including lower British Columbia.