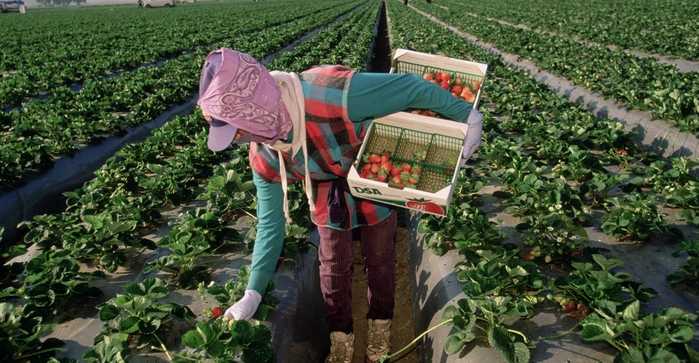 California produces the majority of strawberries in the U.S. The state’s sixth most lucrative agricultural commodity, 2.5 billion pounds were harvested in 2018.

This time of year is particularly important for farms, as strawberry season is peaking in the next few weeks. But because coronavirus is peaking at the same time, a large portion of the market for the berries has disappeared.

Which means that tens of millions of pounds of them could end up in the trash, and some farms could be facing financial peril.

Restaurants — which receive roughly 15% of California’s peak harvest berry crop, according to the California Strawberry Commission — have all but stopped ordering. Throw in the loss of other types of food service operations, and Rick Tomlinson, president of the commission, estimates that as much as 30% of the berries that are set to be harvested through the peak might not have a home.

«So, [farmworkers will] pick the fruit off and the big question is where does it go,» he said. «If there is no home for it, then it’ll just go into the field and unfortunately be lost.»

A TSUNAMI OF STRAWBERRIES IS COMING

It takes a vast, complicated infrastructure of advanced planning, picking, packing and transportation to anticipate and meet world wide demand for strawberries.

Plants were put in the ground months ago and have been tended to ever since. Too much rain or heat, and the quality of the fruit suffers. When a ripe berry shows up, it needs to be picked and packed right away.

From the time they’re plucked from the plant they last roughly two weeks.

By this time of year operations are usually in full swing, with the peak of the season starting in late April or early May, and running for six to eight weeks.

«There’s no stopping the crop. You cannot hit pause. The berries are going to keep coming,» said Soren Bjorn, president of Driscoll’s.

Distributors need to figure out where to send them.

«Everyone is working on this literally every minute of the day right now,» said Tomlinson. «We are down to weeks. That peak happens in May and in the next three weeks the crop is going to double. Every day counts here. Every single day.»

WHY NOT SEND THEM ALL TO FOOD BANKS?

You may be wondering: There are plenty of hungry people. Why not just give the strawberries to them?

Tomlinson said that they’re working with their members to maximize distribution to food banks, food processors and supermarkets.

But as we’ve seen elsewhere — like with the historic run on beans — food supply chains during the age of COVID-19 are being stress tested and routinely failing.

If tens of millions of pounds of extra berries are rerouted to food banks every week, for example, there’d be challenging logistical questions.

Are there enough trucks to move them to locations that didn’t previously accept them in large volumes?

Are there enough workers to process the berries once they get to the food banks?

Is there enough refrigeration at the food banks to store all of the extra berries coming through?

Can they be given to people within two weeks of being picked, or frozen and held on site? If so, for how long?

Different parts of the food system only have so much capacity.

There are opportunities for the government to step in.

The USDA has Defense Production Act authority to go out, purchase food and get it sent to food banks.

«That would be another avenue for them to consider. Buying up berries and to disperse them out to the food banks, or school programs,» said Jonathan Coppess, director of the Gardner Agriculture Policy Program at the University of Illinois.

«This could be one of those times if USDA were willing to be creative, they have quite a bit of capability for repurposing and redistributing and allocating out,» he said. «I mean that’s a big logistical hurdle, but that’s not something that should be just discounted.»

The possibility of major market loss during peak harvest season will likely have asizeable impact on the strawberry industry in California.

«Where you can plan around and work around weather, the idea that this market would dry up almost overnight, right at the peak of the season, is the kind of risk you don’t normally consider or plan for,» said Coppess.

Strawberry farms aren’t subsidized, like corn or soybeans. But the CARES Act — the $2.2 trillion financial stimulus passed by Congress — has an estimated $9.5 billion set aside for the USDA to distribute to farms in need, with priority for specialty crop producers like berry growers.

It’s unclear how that money will be distributed or who’ll get it.

«Right now at the state level, we are just waiting for the implementation of the CARES Act to the state,» said Brooke Raffaele, farm outreach coordinator with the USDA’s Farm Service Agency in California.

Some farms may have insurance that could help with losses. Others may take out loans.

What happens to them through the rest of the year and beyond, depends on how long the huge chunk of the strawberry market stays shut down. At some point, tending to all of the strawberry plants may not be financially feasible.

Farms may have to consider pulling strawberry plants, which could knock them out of the market for the remainder of the season, and potentially limit the number of strawberries available to consumers later in the year.