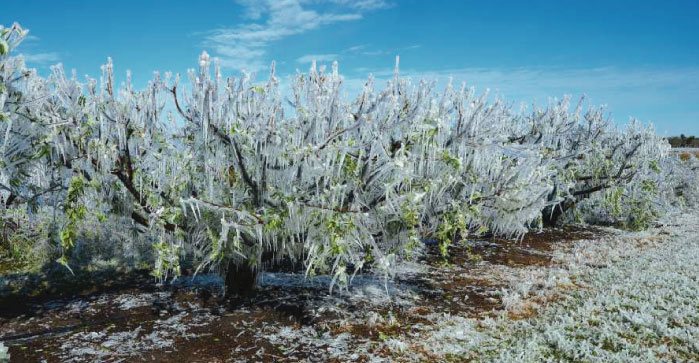 The exceptionally gentle winter that was so kind to energy consumers and road budgets evidently had a well-cultivated dangerous side, sowing the seeds of a rough harvest for some of the region’s peach orchardists and berry farmers.

After fast-forwarding the growing season and exposing precocious buds and blooms, one of the mildest wintry stretches on record was followed by an extraordinary sequence of frosts and freezes in mid-April and May.

“We lost about 90% of our peaches,» said owner John Hurff Sr., whose great-grandfather founded the company.

The Garden State’s peaches are grown over 3,900 acres with an annual “production value” of $26 million, according to state and federal government figures. Perhaps 80% or more of the state’s peach crop appears to have survived the spring chill, officials said, but the losses could translate to as much as a $5 million bite out of New Jersey’s peach industry, one of the nation’s largest.

“We have some significant losses,” said Jerome L. Frecon, a consultant with the state’s Peach Promotion Council.

Strawberry and other berry crops also have been affected by the freeze ambush, Furey said, adding that the damage estimates are still being calculated.

“Mild temperatures for most of the winter meant that berry crops were ready to bloom earlier than usual,” said Kathleen Demchak, a plant scientist at Penn State who specializes in berry production. “That meant that strawberry plants were in bloom, or on the verge of bloom, right when spring freezes hit.”

Said Furey: “It was just very bad timing. It was the most vulnerable time.»

While the non-winter of 2019-20 gained rarefied status for its lack of snow, the consistent mildness of January, February, and March was astonishing.

Temperatures averaged 5 degrees Fahrenheit above normal in all three months in Philadelphia, and precipitation was almost perfectly normal, even if it wasn’t the snowy kind.

So what began happening in mid-April was a shocker. The 30 days from April 15 to May 14 constituted the coolest such period in 54 years, defying the long-term outlooks.

From April 17 to 22, the National Weather Service posted frost or freeze advisories covering significant portions of the region for four mornings.

John Shenk, owner of Shenk’s Berry Farm in Lititz, Lancaster County, recalled that when he went out to examine the strawberry buds after a particularly hard freeze, the damage was evident. “They were black when they opened,” he said.

As if that weren’t enough, similar frost and freeze advisories were posted for the mornings of May 8, 9, and 10.

Strawberry seasons can be quite variable in Southeastern Pennsylvania and South Jersey, but usually those bright-red berries with the green crowns start appearing in late May and peak in early June.

In Lancaster County, where established markets, such as Shenk’s, and ad hoc stands marked by handmade signs populate the roadside, local strawberries still were scarce by the end of May.

Shenk said his early crop took a hit, and he had plenty of company, said Penn State’s Demchak, while others lost most of their crop.

«The first blossoms on some raspberry and blackberry crops were damaged, as well,” she said.

Despite the freezes, and some wind damage to soil in deep South Jersey, Furey said that, overall, the spring growing season was decent with near-normal rainfall.

Blueberries, which should hit the stands in a few weeks across the region, “fared better because they take slightly colder temperatures,” said Demchak.

The freezes might even have had a positive effect on the crop that made it through spring. Last week, Pennsylvania estimated that 71% of the peach crop was “good,” compared with 29% that was “fair” to “very poor.” New Jersey officials said they expect at least an 80% survival rate.

Normally colder areas were better positioned to withstand the freezes, said Daniel Weber, a specialist with the Penn State Extension in Adams County, because they weren’t as far along in the growing season when the temperatures dropped.

Crop “thinning” is a common practice among orchardists, said Furey, as peach growth in some years can be so robust that trees become overcrowded.

Said Frecon, a Rutgers University professor emeritus who has been studying tree fruit for 50 years, “We always like some natural thinning.”

Industry officials say that consumers might reap a benefit from this year’s thinning, said Jeff Wolfe, spokesperson for the New Jersey Department of Agriculture: “With a few less peaches on the trees, they are expecting this year’s peaches to be larger.”