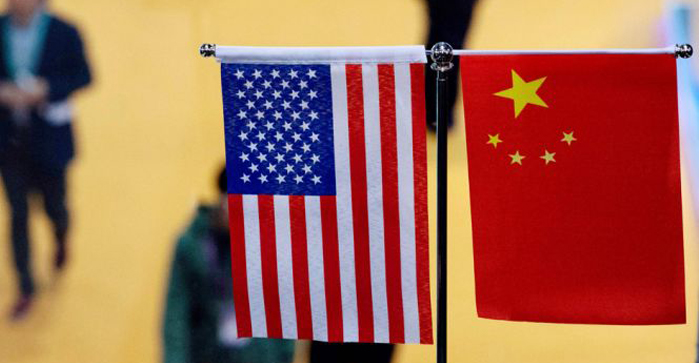 The latest escalation in the trade war between the world’s biggest economies roiled commodities once again after China announced it will impose tariffs on $75 billion of U.S. goods and the White House retaliated.

Soybeans will see an added duty starting Sept. 1, as China seeks to put more pressure on the American farm belt, a crucial voter base for President Donald Trump as he seeks reelection next year. U.S. oil imports into the Asian nation will also incur levies for the first time as Xi Jinping’s government runs out of ammunition in a dispute that’s been raging for more than a year and is threatening global commodity demand.
West Texas Intermediate crude fell 1.2% as of 12:32 p.m. in Singapore, following a 2.1% drop on Friday. Copper also extended declines, while gold rose for a second day as investors sought havens. Soybean and rapeseed meal prices rallied in China on prospects that supplies will tighten. The Bloomberg Commodity Index, which measures returns from a slew of raw materials, was steady after falling 1% over Thursday and Friday.

China’s announcement that it would impose retaliatory tariffs on American goods in two batches — on Sept. 1 and Dec. 15 — is the latest salvo in the trade war between Beijing and Washington. President Donald Trump responded after markets had closed on Friday by raising levies on Chinese goods even further and calling from American companies to pull out of the country.

The shares of Asian energy and commodities companies tumbled Monday. China’s Cnooc Ltd. lost as much as 5.6% in Hong Kong and PetroChina Co. was down as much as 3.7%. Miner Rio Tinto Group declined to the lowest in almost seven months, while Jiangxi Copper Co., China’s biggest producer of the metal, slumped to the weakest since the end of October.

The escalation on Friday came after tensions earlier rose this month when the U.S. said it would boost tariffs on some Chinese goods starting Sept. 1, although Trump delayed some of that increase due to the economic turbulence it might bring to U.S. consumers.

The U.S. threat prompted the Asian nation to halt purchases of agricultural goods and to let the yuan weaken. The Trump administration responded by labeling China a currency manipulator. Trade negotiators from both sides plan to meet for face-to-face talks in Washington in September.

An extra 5% tariff will be put on American soybeans from Sept. 1 on top of the existing 25% duty, according to China’s government. The Asian nation’s freeze in agricultural purchases means a higher levy on U.S. soy products will likely have little impact on trade flows.

“It’s more about making headlines than it is actually changing the amount of soybeans that flow between the U.S. and China,” said Arlan Suderman, chief commodities economist at INTL FCStone.

A 5% levy will also be imposed on crude oil starting next month. Last year, Beijing removed crude from a list of goods targeted for tariffs, signaling the importance of American oil in the global market. The decision to include it now shows how the trade spat has intensified, forcing it to use duties on the strategic commodity as ammunition.

“Energy is getting directly wrapped up in the latest round of China/U.S. retaliatory tariffs,” Noah Barrett, an analyst at Janus Henderson Investors, said in an email. “It’s clearly not a good headline for oil markets.”

While liquefied natural gas may have dodged the latest round of tariffs, plans for new American terminals to ship the fuel abroad are under threat as the tensions surrounding the trade war complicates negotiations with potential Chinese gas buyers.

Pork and beef products are also among the American goods to be hit with added tariffs as Beijing prioritizes the trade war over its need for cheap protein. While China doesn’t buy significant amounts of U.S. meat, the new levies provide additional barriers for producers hoping to help fill a supply gap in the Asian nation as a pig-killing disease decimates the country’s massive hog herd.