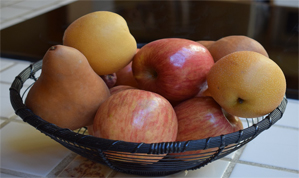 For CY 2017 fresh apple and pear exports are forecast to decrease to 90,000 MT and 300,000 MT, respectively, compared to official estimates as a result of lower production. In addition, diminished competitiveness in export markets will continue to negatively affect exports.

Exports in CY 2016 were lower than initially expected and totaled 90,900 MT for apples and 310,000 MT for pears, from the official USDA estimates of 98,000 MT and 320,000 MT, respectively. Besides lack of competitiveness, exports for both fruit types are projected to remain lower than historical levels as a result of economic difficulties in major export markets, such as Brazil and Russia. In addition, Brazil has been restricting imports due to phytosanitary issues.

Total fresh apple and pear exports during CY 2016 decreased by 15 percent and 7 percent, respectively, compared to CY 2015, due to lower production , especially for apples, but also to the ongoing loss of competitiveness by local companies.

Argentina exports apples and pears to about 60 export markets. In CY 2016, Brazil remained the most significant fruit export market for apples and pears (by volume), followed by the EU and Paraguay (for apples), and Russia and the EU (for pears). Brazil is a traditional market for Argentine pears, especially in the second semester of the year, as it is not a pear producing country. On March 24, 2015, the Government of Brazil closed the market to Argentine apples and pears due to the detection of Cydia pomonella (Carpocapsa) in Villa Regina, Province of Rio Negro. After audits were carried out by Brazilian phytosanitary inspectors in the main apple and pear growing region of the country, on June 17, 2015, the Brazilian market was reopened. However, the local fruit sector considers the protocol negotiated by the Argentine and Brazilian phytosanitary authorities to be too stringent, which hinders export flows. That has forced many local fruit companies to restrict themselves from exporting to Brazil. Private sources estimate that this issue resulted in losses for the fruit sector of about USD50 million in CY 2015. CY 2016, apple and pear exports to Brazil decreased by 9 percent and 17 percent, respectively, compared to the previous calendar year.

After Russia imposed an import ban on EU fruit in August 2014 (which was recently extended to the end of 2017) Russia sought other sources of supply. However, Argentina was unable to take advantage of the opportunity to increase exports to the Russian market, especially for pears, due to the lack of competitiveness of local producers (e.g. unfavorable exchange rate) and the devaluation of the ruble followed by a recession in the Russian economy. During CY 2016, apple exports to Russia decreased by 40 percent and pear exports decreased by 6 percent, compared to the previous year, and exports to the EU increased slightly by 2 percent for apples and 7 percent for pears, due less fruit availability in the Northern Hemisphere. Paraguay was the third largest market for Argentine apples as it is less stringent than traditional markets such as the U.S. and the EU in its quality demands.

Amidst volatile export markets, the United States remains a reliable and stable market for Argentine apples and pears, especially for organic fruit, whose demand continues to grow steadily.

During the first part of the calendar year, most apple and pear exports are destined for overseas markets (mainly Europe and the U.S.) and, during the last semester, exports are oriented to Mercosur countries. Traditionally, Brazil has been more flexible than other markets, such as the EU and the U.S., regarding the quality of the fruit they import. However, they are becoming increasingly demanding as an export market.

The United Kingdom and the United States are traditional markets for Argentine organic apples and pears. The British market is projected to remain stable and the U.S. market to continue to grow. In the U.K. there is a broader distribution of organic fruit, while in the U.S. organic fruit is primarily sold in specialty retail stores.

India opened the market to Argentine apples and pears in CY 2016 but exports have been negligible. In addition, the Chinese market was opened in 2014 although shipments have not been significant so far due to stringent import requirements.