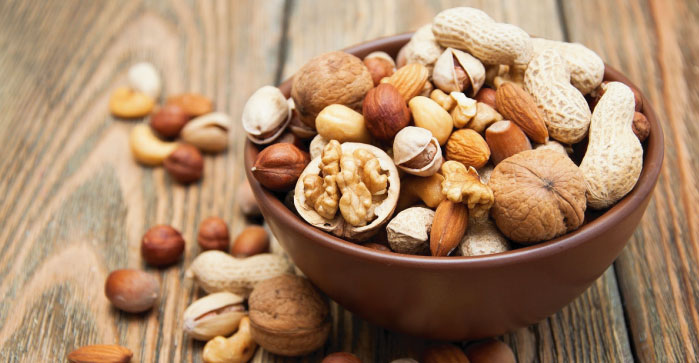 Can eating nuts have beneficial effects for breast cancer survivors? A new study suggests that it might!

Breast cancer patients who consumed nuts were found to have a significantly better disease-free survival over a 10-year study period, compared with those who had not eaten nuts, finds a new study. Further among breast cancer survivors, nut consumption was linked with lower risks of breast cancer recurrence or death.

The finding comes from a study of more than 3,000 patients conducted in China, published Oct. 20 online in the International Journal of Cancer.

The researchers examined the associations of nut consumption (including peanuts and tree nuts), assessed at 5-year postdiagnosis, with overall survival (OS) and disease-free survival (DFS).

Among 3,449 breast cancer survivors from the Shanghai Breast Cancer Survival Study who completed a dietary assessment 5 years after diagnosis, there were 374 deaths during a median follow-up of 8.27 years after the dietary assessment. Among 3,274 survivors without a previous recurrence at the time of their dietary assessment, 209 developed breast cancer–specific events, including recurrence, metastasis, or breast cancer mortality.The nut-disease free survival, associations were not modified by estrogen receptor/progesterone receptor status or other known prognostic factor. The associations did not vary by nut type.

There was a dose-response pattern in the relationship between nut consumption and risk of breast cancer recurrence or death, with those consuming the highest amounts having the lowest risks. Also, the association was stronger for survivors who had earlier stages of breast cancer than for those who had later stages.