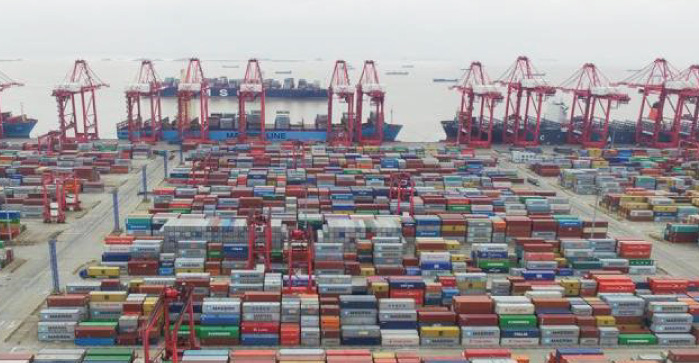 Services were shut on Wednesday at a terminal at Ningbo-Zhoushan port after a worker was infected with the Delta variant of Covid-19.

Ningbo-Zhoushan in eastern China is the world’s third-busiest cargo port.

The closure threatens more disruption to supply chains ahead of the key Christmas shopping season.

Closing the terminal on Meishan island until further notice will cut the port’s capacity for container cargo by about a quarter.

It comes as the cost of shipping from China and South East Asia to the East coast of the US has already hit a record high, according to the Freightos Baltic global container freight index.

And some UK businesses were already feeling the pressure of much higher shipping costs.

Jason Chiang from Ocean Shipping Consultants told the BBC’s Asia Business Report that the global shipping industry is likely to feel the impact of the pandemic for several more months.

«We don’t expect to see any new shipping capacity until two years down the road. So everything between now and two years will be dependent on how the pandemic plays out,» he said.

For people trying to ship goods from East Asia to Europe or the US, it’s one blow after another.

The Covid crisis put the container shipping industry under intense pressure by knocking normal patterns of supply and demand out of kilter.

Then came the Ever Given, which blocked the Suez canal for six days, delaying hundreds of vessels and causing knock-on effects that lasted for weeks.

And on top of that, partial closures of key terminals in China – at Yantian earlier in the year and now Ningbo – have caused further disruption.

Each time something like this happens, it can trigger further problems, including congestion at other ports – many of which are already operating at a slower rate than usual due to Covid restrictions.

«Perfect storm» is an overused cliche, but right now it’s a good description of what’s going on in the industry. Certainly this is more than merely a case of choppy waters.

If the terminal remains shut for an extended period it could have an especially large impact on the world economy.

In the city of Ningbo, where the port is located, authorities have also suspended inbound and outbound flights to China’s capital Beijing.

A district close to the port has also been put on partial lockdown as businesses including cinemas, gyms and bars have been shut.

The port’s closure comes as global trade is usually much heavier in the second half of the year as businesses in Europe and North America prepare for a jump in sales ahead of Christmas and other holidays.

This is the second coronavirus-related closure to hit a Chinese port in recent months after Yantian in Shenzhen was partially shut for several weeks from the end of May.

Companies were already struggling to source the goods to keep their business going as the pandemic shut down economies around the world.

Global supply chains were put under even more strain when a huge container vessel became stuck in the Suez Canal in March.

The Ever Given, which carries cargo between Asia and Europe, blocked the major shipping lane in Egypt for almost a week.

That caused huge disruptions and delays to the global shipping industry as vessels were forced to wait for the canal to reopen or take the much longer route around the southern tip of Africa.