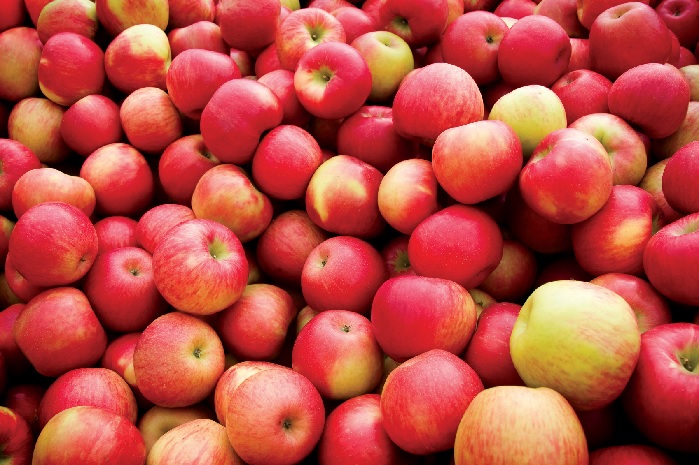 The 2017/18 MY apple production is estimated to decrease by 11 percent to 800,000 MT, from 902,130 MT in the 2016/17 MY,due to the decrease in area harvested, limited irrigation water, lower yields, smaller fruit sizes, and fruit damage from hail, windstorms and severe sunburn. About 80 percent of the apple production in South Africa is from the Western Cape, which is a winter rainfall region and is currently undergoing a severe drought.

The below-average rainfall received in 2017 and the low dam levels (about 20 percent) will severely impact the availability of irrigation water in the 2017/18 MY by up to 60 percent. Some of the short term solutions that farmers have adopted to combat the drought include: prioritizing the irrigation of higher yielding varieties and orchards, while the remaining orchards would be irrigated just to keep the trees alive; removal of fruits from trees; and the use of nets which is believed to save water by up to 25 percent.

There are also indications that some farmers cut down some trees to reduce costs and also removed older orchards. These measures and the financial pressure faced by the growers are expected to prolong the recovery of apple production once normal rainfall and weather patterns return. The quality of apples was also severely impacted by the drought conditions, as the fruit is dry, has a shorter shelf life and in some regions the ideal color was not achieved.

The impact of the drought to the 2017/18 MY production could have been more severe; however, it was partially offset by new orchards that came into full production. The Western Cape is the heartland of deciduous fruit production, with a climate similar to the Mediterranean, which is favorable for apple production. Ceresis the largest apple growing region accounting for 29 percent of the area planted, followed by Groenland(27 percent), Langkloof East(18 percent)and Villiersdorp(15 percent).

Harvest for South African apples typically begins at the end of January and runs through to June, with peak harvest times falling between February and April.Since 2008, the Golden Delicious cultivar has been the most planted cultivar at about 24 percent of the area planted in South Africa, followed by the Granny Smith cultivar at 18 percent. Other cultivars which have been growing steadily are Gala (16 percent), Pink Lady (10 percent) and Fuji (9 percent). 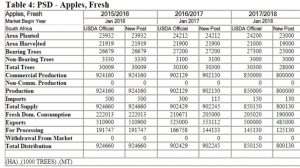