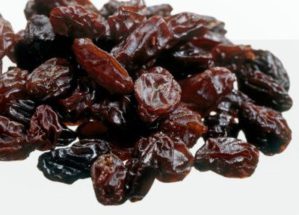 COMPARTIR IMPRIMIR ENVIAR POR E-MAIL
The South African raisin drying process has been delayed due to sporadic showers of rain since December, with an expected drop in production, but processors predict excellent raisin quality.
Thompson Seedless dark raisins, which represent approximately 60% of South Africa’s estimated total harvest of 55 000t for 2017, usually takes two weeks to dry in the sun under the normal weather conditions of 40-42°C and 7-8% humidity of the Lower Orange River region, Northern Cape, close to Namibia. However, at the moment, growers are experiencing ‘low’ temperatures of around 36°C, humidity of 27-30%, regular rain showers and an eastern breeze instead of the usual one from the west. This means that raisins are taking up to a month to dry, leading to a two-week delay for those awaiting South African raisins, primarily the EU, North and South America, North Africa, the Middle and the Far East.
Many growers’ trays are full of not-quite dry raisins (a maximum of 13% moisture is allowed) and about 10 to 20% of the drying grape harvest is still in the vineyard. Growers’ drying infrastructure is used to capacity and they’re running out of drying space. This is particularly a problem with Golden raisins (sulphur-treated raisins) not dried by the sun but rather by ventilation, as their trays are stacked on top of each other. “The last grapes must be picked by the end of the week,” explains Peter Kuilman, CEO of RedSun Raisins, “otherwise there’s an increased chance of grapes becoming spoiled on the vine.”
Growers near Keimoes suffered losses when a wind storm moved through the area two weeks ago, upending drying trays, scattering raisins and damaging infrastructure. Some growers experienced losses as high as 30t, but the vast majority of raisins were salvaged.
Gog van der Colff of the Carpe Diem Group reckons that there will be an overall drop of 10% in raisin volumes, but for Golden raisins the decrease might be between 30 and 50%. “The problem with drying is more to the east of the production area, from Groblershoop to Augrabies. The quality, however, is very good.” About 20% of their producers’ raisins have completed the drying process, 60% of the harvest is in the process and the rest of the grapes are still growing.
Peter Kuilman, whose company exports to 26 countries, agrees that the quality of raisins will be excellent this year. “The grapes were fantastic, with high sugar and large berries because the harvest is somewhat smaller this year. As for Golden raisins, South Africa is a world leader. Our colour and taste are peerless.”
The industry uses green seedless grapes, cultivars like Sultanina (Thompson Seedless), Merbein Seedless and Selma Pete. Merbein Seedless is a very vigorous grower and seems to be more resistant to rainy conditions than Sultanina. The latter variety, Selma Pete, hasn’t yet proven itself as a successful Golden raisin. The same grapes are used to produce both dark and golden-coloured grapes. In the first instance the sugars in the grape is caramelised by the sun, forming the dark colour, while a sulphur dioxide treatment retards this browning and preserves the natural flavour, leaving a golden-coloured raisin.
Of the approximately 880 raisin producers in South Africa, only 20% produce Golden raisins because of the more intensive production process and infrastructural demands. However, Golden raisins currently attain US$1 000 per tonne more than Thompson raisins and there’s growing interest in this product which currently makes up 20 to 25% of South Africa’s total raisin production. Ninety-five percent of South Africa’s raisin production is exported.
South Africa’s Zante currants are also held in very high esteem. “Our currants are quite exceptional, with more than 1 000 berries per 100 gram,” says Kuilman. “The very small fruit is excellent in baking, spreading evenly through the mixture, but due to the small size it is very labour-intensive to produce.” South African currants are not produced in the Northern Cape, but in the Vredendal area in the Western Cape where the more pronounced day-night temperature difference and sea breezes are more to their liking.
“The market likes South African product and our raisins are available at lower prices than those from California. Because of our small industry, we have direct contact with the growers who assiduously comply with international standards regarding, for instance, residue levels,” adds Kuilman. RedSun Raisins’ largest export destination was Germany in 2016 and the Netherlands the year before.
The 2016 raisin season was quite different: it saw a week of continuous rain during January before the grapes were fully ripe, leading to waterlogging and burst grapes. Of the bountiful harvest of 63 000t, an estimated 10 000t fell to the ground in vineyards, and there was more concern regarding the raisin supply. This year raisin processors aren’t worried about the supply.
Fuente: http://www.redsun.co.za     http://www.cdgroup.co.za/
(Visited 21 times, 1 visits today)
VOLVER A NOTICIAS