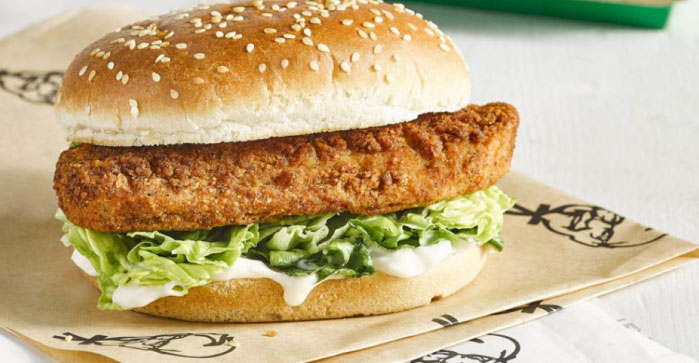 Today has announced the launch of its new plant-based burger, called the Zero Chicken Burger, in restaurants throughout Singapore (h/t VegNews). The new menu item is now available in 80 different locations within the city-state for a limited time.

The Zero Chicken Burger is meat-free, but not fully vegan, making it more suitable for vegetarians and flexitarians. The “chicken-free” patty uses a mycoprotein base and is seasoned will classic recipe of 11 herbs and spices. In addition to the patty, the burger will include cheese slices, mayo, lettuce, BBQ sauce, and a toasted sesame bun. The nutrition information has not been released for the new item yet, so it is currently unclear if this plant-based burger will contain as much protein as regular chicken burger.

It is also important to mention how Singapore is becoming a hot spot for food tech and alternative protein developments. Besides plant-based burger launch, various other companies are developing and launching alternative protein products in this South Asian nation. Eat Just made its first commercial sale of its cultured chicken meat, called GOOD meat, in Singapore at the end of last year. Perfect Day is opening a new lab in the city-state in April 2021 to continue developing its flora-based alternative dairy products. Cell-based seafood producer Shiok Meats, which raised $12.6 million in its Series A round last year, is also located in Singapore.