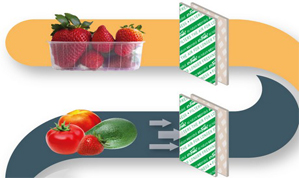 A new technology is on a mission to turn the great British strawberry green as the summer season kicks off.

More than 38,000 tonnes of soft fruit/berries, with a value of £180 million, are thrown away by British households every year mainly because they’re not eaten in time.

The UK is one of the biggest consumers of strawberries in the world with millions eaten across the summer at big events such as Wimbledon (where over 28 tonnes of strawberries – 1.4 million are eaten each year) and on a day to day basis during picnics and BBQs.

It takes almost half a gallon of water to grow just one strawberry. This means wasting food also wastes huge amounts of water at a time when the UK faces a possible summer drought.

New figures from tech company It’s Fresh! show their clever filter inserts are now saving 1134 tonnes of strawberries each year which is the equivalent of almost three million punnets or forty times the number of strawberries eaten at Wimbledon every summer.

Some of the UK’s leading supermarkets including M&S, Morrisons, and Waitrose are using this little green and white stripy filter in their packs to help their fruit last longer and to improve freshness for consumers.

The simple filter insert absorbs the ripening hormone, ethylene, emitted by the fruit, so slowing the ripening process and prolonging life and quality by up to four days. This means less is wasted both in supermarkets and at home.

“Many of us know that over a third of the food produced globally gets wasted, but what you might not know is that it takes almost half a gallon of water to grow one strawberry, add to that the labour & fuel to pick, pack, ship and process it for retail merchandising ….and you can begin to see the scale of the problem that we face.”

“Some might say it’s ‘just the cost of doing business’, I would say that collectively we have to make changes and take better care of both our food and our precious resources.”

The  technology, from Milton Keynes based It’s Fresh!, has also now been adopted by leading US supermarkets Walmart , Albertsons Safeway and by Carrefour in Europe.

“The huge amount of food that’s thrown away by all sectors is a poignant symbol of our broken food system – so reducing it is the right thing to do, and it can also save restaurants a lot of money.”

The filter operates passively and meets all health and safety guidelines for the EU and the USA. The technology, which has been rigorously tested, has far-reaching implications for food waste throughout the supply chain.