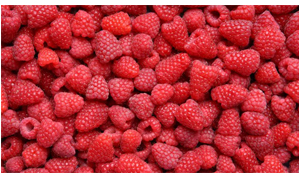 The raspberry season continues, and according to the official data provided by the wholesale markets, the fruit’s prices are rather stable and only slightly fluctuate in some places, although the rates in processing plants have increased.

On Warsaw’s Bronisze wholesale market, the maximum price paid for raspberries has dropped by 1 złoty*. Currently they cost 8-14 złoty/kg.

We have also seen a fall in Kalisz, where raspberries cost 10-12 złoty/kg last week and now only 8 złoty/kg.

The wholesale market in Rzeszów is the only place where raspberries have become more expensive. Currently, they are sold for 12 złoty/kg (compared to 10 złoty/kg last week).

Meanwhile, according to IERiGZ, the prices of raspberries for freezing in processing plants have increased compared to last week.

In the province of Kuyavian-Pomeranian, processing plants buy raspberries for an average of 4.9-5.1 złoty/kg, depending on the class. In Podkarpacie, the prices are similar (4.9-5.2 złoty/kg), and this is also the case in West Pomeranian (with 4.8-5.3 złoty/kg, compared to 4.5-4.9 złoty/kg a week earlier). In Mazovia, second class raspberries are purchased for 4.8 złoty/kg, while a week ago prices oscillated between 4.4 and 4.7 złoty/kg.

A week ago, processing plants paid an average of 4.45-4.87 złoty/kg and now 4.85-5.2 złoty/kg. It is worth mentioning that these prices are similar to those of the previous year and even slightly higher. In the same period last year, raspberries were bought for 4.93 złoty/kg.

The analysis was based on the official prices quoted by the wholesale markets on 7-8 August and data from the Institute of Agricultural and Food Economics.