More than 250 representatives of the international apple and pear sector met on the occasion of the 36th Prognosfruit Conference on 3rd August 2012 in Toulouse (France). On this occasion, WAPA (World Apple and Pear Association) released the 2012 European apple and pear crop estimates.

The 2012 apple and pear production in the EU will be significantly lower than average given unfavourable climatic conditions in winter and spring across Europe. Apples will decrease by 9% compared to the previous year while pears are estimated to have a lower crop by 22% compared to 2011. 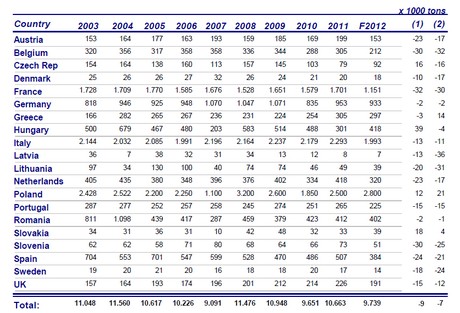 More specifically for apples, the 2012 European crop forecast is announced at 9.739.000T. This production is 7% lower than the average for the last three years. In regard to varieties, Golden Delicious production will be down by 15% to 2.212.000T. Gala will decrease by 6% to 1.070.000T. Red Delicious will decrease by 18% to 555.000T, while Idared will go up 34% given a larger crop in Hungary and Poland. With the exception of Poland which will witness a larger crop (2.8 Million T) due to new plantings, most of the Member States will record lower crops; this will also be reflected in the varieties breakdown.

Elsewhere in the Northern Hemisphere apple crops are also expected to decrease compared to last year, namely in Turkey (-3%) or the various Balkan countries. Meanwhile, the crop in Russia and Ukraine will respectively increase by 8% and 4% due to new bearing trees. The official data for the USA will be released mid of August but first indications lead also to a crop lower by 15% due to heavy frost in the Mid West and to a lesser extend in the North East. 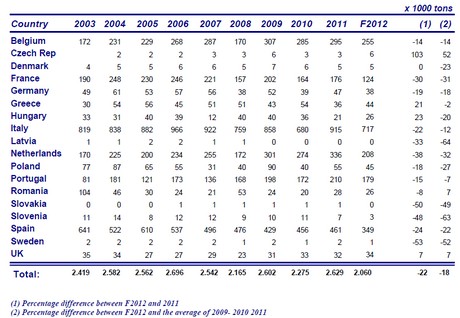 Overall, climatic conditions have not been favourable in many parts across Europe during blossom and the beginning of the growing period of the fruit. Under these particular weather circumstances having their impact on the production, the relevance of transparency of data is important and the effort of Prognosfruit/WAPA in this respect is underlined. The new season is to start according to the normal harvesting schedule on a basis of clear stocks from the last season and no overhang with Southern Hemisphere fruit while there are no pending stocks for apple juice concentrate which should strengthen the market for the benefit of the sector and provide better return to growers after several difficult seasons.