“The total crop projection for the coming season is 192 million bushels, which is down from 224 million last year,” Mark Gedris, director of membership and communications for the Vienna, VA-based U.S. Apple Association, told The Produce News Aug. 10. 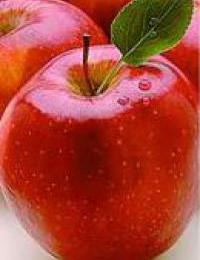 The U.S. Department of Agriculture released projections for the upcoming 2012-13 season, and indications are that the crop will be down 14 percent nationwide.

“The total crop projection for the coming season is 192 million bushels, which is down from 224 million last year,” Mark Gedris, director of membership and communications for the Vienna, VA-based U.S. Apple Association, told The Produce News Aug. 10. “The hardest hit this year was Michigan, which is projected to be down by as much as 90 percent. It’s normal is 25 million bushels, and the state is now projecting 2 million bushels.”
Mr. Gedris added that last year was a record year for U.S. apple exports, which could be hardest hit by the shortage this year.

“Last year’s exports were particularly strong,” he said. “The U.S. set records in volume and value in exports. We sent more apples to the export market than ever, and we got a higher price for them. We don’t have any idea at this moment what this shortage will do to the export market.”

He added that New York had some problems in the western part of the state as a result of a late-spring freeze. A U.S. Department of Agriculture crop forecast released Aug. 10 places the New York state crop at 14 million boxes, down 54 percent compared to the state’s five-year average production of 30.7 million boxes.

“This year puts a spotlight on the kinds of pressures that our growers have to deal with year in, year out,” said Jim Allen, president of the New York Apple Association.

North Carolina and Ohio are also expecting lower-than-normal volumes. Pennsylvania is forecasting a normal crop with some variations based on region. Washington is projecting a normal to slightly higher-than-normal crop, which could carry the country and the export demand.

Mr. Gedris would not comment on projected price increases based on supply and demand, but the general theme in the apple industry is that prices will be high in the coming year.

“This is the first time since 1986 that we are projecting a dip under 200 million bushels for the U.S.,” said Mr. Gedris. “Michigan growers, we are told, are getting some support from the state government.