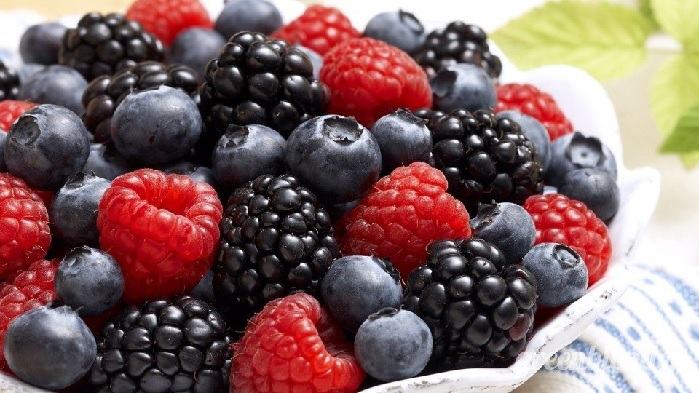 I love berries! They are one of my favorite foods because they taste so good. It is sheer bonus that they are also packed with antioxidants and phytochemicals, and are so easy to eat. Just a quick rinse and they are ready to take on the go. They can be added to cereal, yogurt, or salads, eaten alone as a snack, or whirled into smoothies.What can we eat to protect our brains?

Dr. Martha Clare Morris, the nation’s foremost expert on nutrition and brain health, outlines her recommendations in her latest book, Diet for the MIND: The Latest Science on What to Eat to Prevent Alzheimer’s and Cognitive Decline. In this exclusive excerpt, she describes how berries can provide protection from cognitive decline.

Much of what we know about the remarkable impact of berries on brain health comes from animal models in which extraordinary effects were observed for blueberries, strawberries, blackberries, and cranberries. In aged rodents, blueberry and strawberry extracts either attenuated or reversed both motor and cognitive functioning deficits. The mice experienced better memory skills, and the hippocampal region of their brains, which is key for memory function, actually generated new neurons. Remember, too, that the hippocampus is where we know Alzheimer’s disease begins.

A few large epidemiological studies, including my own investigations of older Chicago an residents, confirm the extensive research that’s been conducted in animals. In these human studies, subjects who ate berries at least once a week had a significantly slower decline in cognitive abilities. And in the largest research study to date, blueberry and strawberry consumption during midlife was measured in 16,010 women of the Nurses’ Health Study and related to their decline in cognitive abilities during their 70s.35 Compared with the nurses who consumed blueberries less than once per month, those who consumed one or more servings of the berries on a weekly basis had slower rates of cognitive decline. What’s more, this was after taking into account other factors associated with better cognitive functioning, like education, income, and physical exercise.

Similar findings were observed for the nurses who consumed two or more servings of strawberries per week. The authors of the study concluded that cognitive aging was delayed by up to 2.5 years among women with higher blueberry and strawberry intakes. In other investigations of these same nurses, eating two or more servings a week of berries was associated with 24 percent greater odds of aging healthfully — more specifically, these nurses had no major chronic diseases or major impairments in their thinking abilities, physical function, or mental health.36

In my two Chicago studies, those who ate berries experienced cognitive decline at the pace of someone who was two to six years younger — this in 3,768 CHAP participants age sixty- five and older, and in 959 of the much older MAP participants. In addition, among the MAP participants who were free of dementia at the beginning of the study, those who ate two or more servings of berries each week were 52 percent less likely to develop Alzheimer’s disease over an average period of five years!

These promising findings are supported by a 2017 randomized trial in humans in which both the investigators and the participants were blinded to the type of berry intervention they were receiving, either a freeze-dried blueberry equivalent to 1 cup of fresh blueberries or a blueberry placebo. After just 90 days of the intervention, the participants in the blueberry group showed significantly fewer errors in tests of learning.

Anthocyanins have promising implications for Alzheimer’s disease. In the study of rodents I mentioned previously, those that were fed blueberry extract had increased levels of anthocyanin in the hippocampal region of the brain. Remarkably, these levels were correlated directly with increases in cognitive performance, which strongly implicates anthocyanin as an important dietary component in neurogenesis and memory performance. In other words, eating blueberries may improve memory function through the growth of neurons in the brain’s memory region. This has not been examined in the human brain as of yet.

It’s important to mention, too, that unlike frozen vegetables, frozen berries are processed in a way that can impact their nutrient count— specifically, their flavonoid content. For instance, 100 grams of frozen raspberries (approximately 3/4 cup) contain 24 milligrams of anthocyanins, or half the anthocyanin content found in fresh raspberries (48 milligrams). Similarly, frozen blueberries provide 94 milligrams anthocyanins versus 163 in fresh berries. Cooking will also decrease a berry’s anthocyanin levels.

So, based on these animal and human studies, I suggest eating at least 1 cup of berries every week. The fresher, the better!