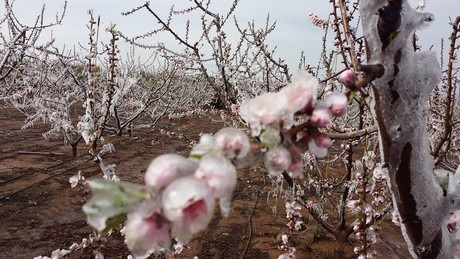 COMPARTIR IMPRIMIR ENVIAR POR E-MAIL
The severe frosts recorded in the last few days have caused damages in Murcia and the Region of Valencia. Temperatures have fallen as low as 6 degrees Celsius below zero and this has mainly taken a toll on extra early stone fruit crops. Although an official assessment has yet to be carried out, the Association of Producers and Exporters of Fruit of Murcia (Apoexpa), believes that about 20,000 tonnes may have been lost.
After a first evaluation, the Councillor of Water, Agriculture, Livestock and Fisheries, Francisco Jódar, also assured that the damages will possibly entail the loss of some 25 million Euro; 12 of them in Cieza alone.

“The frosts have affected specific production areas of Murcia, with the most affected being those of Calasparra and Cieza. We don’t have official figures yet, but we estimate that around 20,000 tonnes may have been lost, mainly extra early nectarines that were already in bloom,” says Joaquín Gómez, president of Apoexpa. “Fortunately, these areas were undergoing a major varietal conversion to less early varieties, which has greatly attenuated the impact of frost,” he said.

“There have been substantial damages, although they will not make a big dent in Murcia’s total stone fruit production, which amounts to more than 400,000 tonnes. There will consequently be no shortage of fruit at any time during the next season,” says Joaquín Gómez, who adds that, in terms of volume, the harvest is expected to be similar to that of last year, with a very remarkable quality thanks to the many hours of cold recorded in December and January.
In Italy, the damage has been considerably more severe, with about 70% of early extra fruits reported to be affected in Apulia and Campania, whose trees were already in bloom. This could mean less pressure for Spanish fruit from June.
Although there is still some risk of frost in the next few weeks, the rainfall recorded at this time and that expected for the rest of the week will help reduce it. Fortunately, most of the producers affected by frost in Murcia are insured.
Fruit trees, almonds and citrus fruits affected in the Region of Valencia
According to information from the Unió de Llauradors, frosts have caused damage to some crops, such as almonds, fruit trees, some vegetables and, to a lesser extent, citrus fruits.
The earliest stone fruit varieties, especially peaches and nectarines, have been affected mainly in the regions of La Ribera and Vall d’Albaida. In the case of vegetables, artichokes are the most affected crop, as frost blackens its surface and deteriorates its commercial value. The area of the Designation of Origin Benicarló was hit by frost last Friday, with temperatures falling to -1.5 degrees Celsius, spoiling the harvest and reducing the production volume.
Source: http://www.freshplaza.com
February 28, 2018
(Visited 21 times, 1 visits today)
VOLVER A NOTICIAS