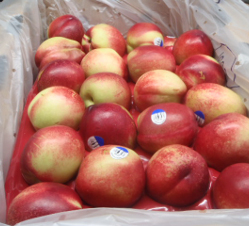 Shipments were running seven days ahead of last year, Pearson said. Volumes this season should be at least in line with the 5-year average but much higher than last season, when fruit was hard hit by freezes.

“It looks like a better-than-average crop historically, and a lot better than last year. The quality looks good, and the indications from Chile are that it looks good on the tree.”

“In general it should be what we would call a normal tree fruit year, and so far demand has been good,” she said Jan. 5.

That said, the Chilean stone fruit industry is not like the country’s grape industry, which can provide accurate pre-season estimates to importers, Eastham said.

With stone fruit there’s no single committee or other trade group to provide an estimate, Eastham said. As a result, early in the peach, plum and nectarine deals, it’s hard to get a firm handle on volumes.

But the early signs were good.

“The growers we have, it looks to be normal. There are no freeze or other condition issues.”

“We’ve got a nice crop coming here. The growing conditions and sizing are good. We’re making sure retailers are ready to promote.”

Early varieties of Chilean peaches would start peaking the week of Jan. 12 for Jac Vandenberg, with nectarine volumes following in early February and plum volumes in mid-February, Padover said.

On Jan. 6, the U.S. Department of Agriculture reported prices of $18-20 for cartons and lugs of two-layer tray packs of yellow-flesh peaches from Chile, down from $28 last year at the same time.

Karen Brux, managing director of the Chilean Fresh Fruit Association, San Carlos, Calif., said importers have had unprecedented requests for Chilean stone fruit shipped by air this season. The industry is working with more than five major retail chains on point-of-sale materials for promotions, she said.

“We’ve seen stronger retail interest than ever before in promoting Chilean stone fruit.”

Rains that put big dents in Chilean cherry crops could lead to some discoloration or other quality issues, but as of Jan. 5, Pacific Trellis had not heard of any, Eastham said.

While plums will be on the small side, peaches and nectarines should be in the normal range, with plenty of 40s and 50s, Pearson said.

Bengard Marketing expects to have promotable volumes of peaches by mid-January, yellow-flesh nectarines by early February and plums by mid-February.