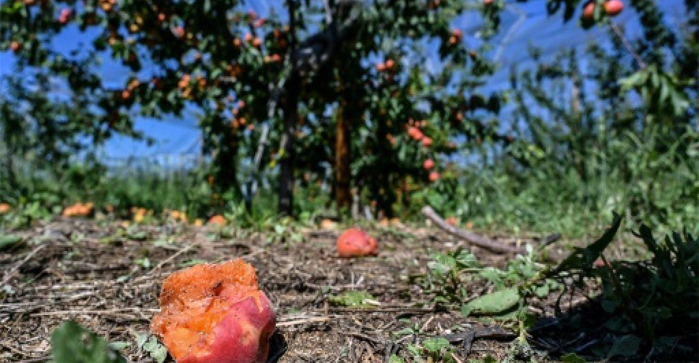 Farmers in southeast France counted the costs from lost harvests on Sunday after a fierce storm battered the region with hail the size of ping-pong balls, decimating orchards and vineyards just as the summer season was kicking into high gear.

«Pretty much my entire harvest is ruined,» said Gregory Chardon who grows apricots, peaches and cherries at his farm in La Roche-de-Glun in the Drome department, about an hour’s drive south of Lyon.

Even the netting strung over his fields was no match for the tempest of hail which suddenly struck on Saturday afternoon, strewing the ground with damaged fruit and broken branches.

«The damage is enormous and widely spread — cereals, greenhouse and vegetable farms, and vineyards as well,» Chardon said.

In the neighbouring village of Pont-de-L’Isere, Aurelien Esprit showed apricots littering the ground and battered apple trees at his orchards in a Facebook video.

«Unfortunately the season ended for us last night. I don’t think I’m going to make it this time,» he said.

«It’s catastrophic, I’ve rarely seen scenes like this,» Guillaume told BFM television while touring the area Sunday. «It’s unthinkable that farmers would be forced into bankruptcy because of this.»

The epicentre of the storm was at Romas-sur-Isere where streets were turned into raging torrents.

The hail shattered car windshields and severely damaged the roofs of dozens of homes, including smashing the sunlight on the roof of a gymnasium where a judo competition was being held.

In the neighbouring Haute-Savoie region, a 51-year-old German woman was a killed after a tree fell on her camper during the storm.

Rescue workers responded to hundreds of calls for help and officials said 10 people were injured.

«Weather episodes as violent as this are quite rare, and I’ve never seen one like it in this area,» said Lieutenant-Colonel Herve Gabion of the fire brigade for the Drome department.

View more about this: