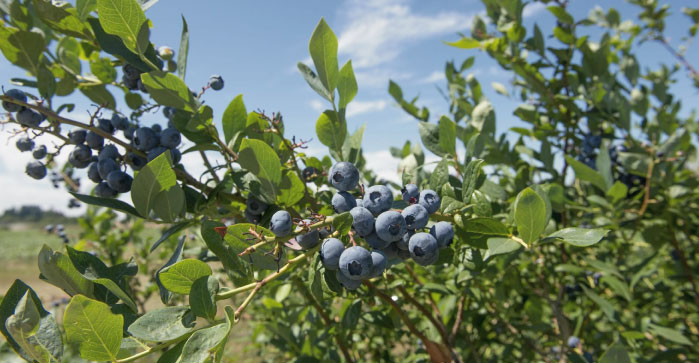 “It was unchartered territory,” said Jay Hoffman of Hoffman Farms in Sherwood. “Nobody knew how to deal with that kind of heat.”

OSU Extension Berry Specialist Bernadine Strik at the Oregon Blueberry Field Day in July spoke about how the heat wave that hit Oregon in late June fried some blueberry plants, particularly this guard row at the North Willamette Research and Extension Center in Aurora.

The heat, which hung over the Valley from June 26-28, “couldn’t have come at a worse time for some of these cultivars,” said Bernadine Strik, OSU Extension Berry Specialist at the Oregon Blueberry Field Day in mid-July.

“The heat literally turned them to raisins on the bush,” Hoffman said. “Anything out in the direct sunlight was deeply affected. Anything that was protected inside the bush seemed to fare a little better.”

In all, Hoffman estimated his farm ended up with about 25 percent of their normal yield in Aurora, which he said is better than some fared. “I heard that a lot of growers didn’t even pick the Auroras,” Hoffman said.

Karl Dettwyler of Blue Line Farms in Silverton said that he pulled 1,617 pounds to the acre in an 18-acre field of Auroras, a field that typically yields about five tons to the acre. He added that he plans to pull that field out this offseason.

“The heat destroys that variety if you get really hot,” he said. “So, it is time to move on.”

Other varieties fared better, but not much.

Doug Krahmer of Berries Northwest said he lost between 20 and 30 percent of his Reka and the early-season variety Duke, noting that he was about halfway through his first pick of Duke when the heat hit.

“I had a 40-acre organic Duke block that was ready to pick (when the heat hit), and we moved into it on Tuesday morning (one day after the three-day heat dome) and picked for an hour and said: ‘Okay, we’re done.’ We ended up machine picking it and sending it to the freezer,” Krahmer said.

Krahmer said he also lost between 10 and 15 percent in Draper yield. And, he said, berries didn’t seem to size well in the late-season variety Ochlockonee. He added, however, that some of his mid- and later-season varieties, including Legacy, Liberty and even the Elliot, performed well. “They had higher yields than we’ve ever had on them,” he said.

“I think because of the dry spring, we were set up for one heck of a big crop of blueberries and because that heat hit, it didn’t come to bear,” Krahmer added. “But in the fruit that didn’t get damaged in the heat, we had good yields.”

Dettwyler, meanwhile, said he lost between 10 and 20 percent on his Legacy and Liberty varieties and took about a 30 percent loss in his Elliots.

Hoffman said he was fortunate when it came to his early-season varieties, noting he had most of them harvested prior to the heat wave. “The Dukes and everything that came off prior to the heat, those varieties dodged a bullet,” he said. “It did take some of the tail end of the Duke away, but the early, fresh Duke was pretty decent.”

Growers tried different things to mitigate the heat, and with varying success.

Krahmer, conversely, said he had more damage where he used overhead irrigation than where he didn’t. “It looked like where we were keeping it watered with drip is where it did the best,” he said.

“I think the overhead would have done just fine if it had only reached 110,” Krahmer added. “But when you get to 117, ouch. And the wind was blowing 15 miles an hour out of the north. Man, I was outside during most of that, and it was just miserable. It was scorching you like you were in a blast furnace.”

In addition to using overhead irrigation, Krahmer tried spraying on a clay-like material that is purported to reflect the heat. “That didn’t work very well,” he said.

Asked if he would do anything different if a similar heat wave hit again, he said, “I don’t know that I would change anything other than not use the clay because by using the clay, I was not able to harvest that fruit for fresh, because it still had that on it even when we got ready to harvest.

“When the pressure is on,” he added, “you just do whatever you have the ability to do.”

Hoffman said much the same. “Did we learn anything? There are a few things we might try different,” he said. “But I don’t know if there was anything we could have done to overcome that heat. When it is 118 degrees and you have a 20 mile an hour east wind, that is like having a hair dryer out there. It was brutal.”