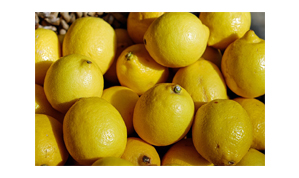 The U.S. lemon crop is anticipated to be down 3 percent to 862,000 tons from the 2015/16 final utilized total of 890,000 tons, but only 1 percent down from the average utilized production of the last three seasons (table 3). Both Arizona and California are forecast to experience decreases in production this season. Specifically, production in Arizona is forecast to be down 11 percent, while California output will decrease 2 percent.

Despite lower domestic production, fresh lemon grower prices from August 2016 through January 2017 were 8 percent below the same period last season. The average price for the season through January is $34.30 per box, compared to $37.37 over the same period in 2015/16 (table 9). AMS reports that movement is down 9 percent this season through mid-March; however, increased imports are partially mitigating a sluggish domestic market and likely contributing to the ongoing lower prices. Slow movement is likely due to recent rains in California, which delayed harvesting. This season’s forecasted decrease in production could reduce available supply and generate upward pressure on prices as the season continues.

Fresh lemon exports from August of 2016 through January 2017 are up less than 1 percent compared to last year, reaching 51,810 tons. Japan and Canada remain the two top destination markets for U.S. fresh lemons. Although season-to-date export shipments to both top markets are up, declines in other important market destinations such as South Korea and Australia are countering this growth.

Imports of fresh lemons from August 2016 through January 2017 were 6 percent above the same period last year, reaching 66,448 tons. Roughly 80 percent of lemon imports occur between August and January. The U.S. lemon market continues to be dominated by imports from Mexico and Chile. Mexico continues to be the main supplier of fresh lemons to the United States, and increased its exports to the United States so far this season by 17 percent. Fresh lemon imports from Chile, the second most important supplier, have decreased 24 percent. Important changes in the domestic market for fresh lemon may occur if the United States allows imports of lemons from Northwest Argentina.