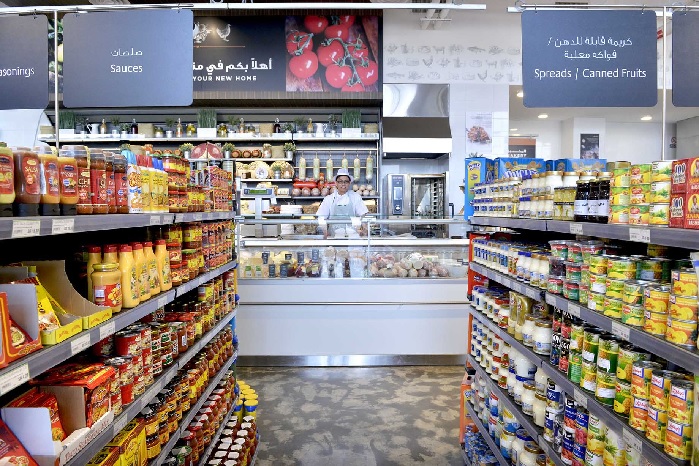 1. Supermarkets
Supermarkets range in size from 500 to 5,000 square meters, and may have five or more checkout counters and modern IT systems. They carry a comprehensive selection of groceries and other products such as produce, meats, bakery items, frozen and chilled items, and a range of non-food products.

In 2016 there were Approximately 1,031 supermarkets in Saudi Arabia, an increase of
Approximately 8.1 percent over 2015. They accounted for approximately
$10.9 billion of the food products sold by retailers in that year. Major Saudi supermarket chains such as Tamimi and hypermarkets such as LuLu and Danube import a significant percentage of the food products they sell directly from the United States, employing consolidators. The products they import directly from the U.S. include cheese, nuts, fresh fruit, condiments & sauces, cereals, ketchups, fruit juices, vegetables,and several varieties of high value food products. Some products like strawberries, lettuce, and other fresh produce are shipped by air, while most products by shipped by sea containers. Major Saudi hypermarket and supermarkets chains attend regional shows such as Gulfood in Dubai, SIAL in Paris,and Anuga in Cologne, Germany to seek new products and establish contacts with potential U.S. suppliers.

Hypermarkets and supermarkets strive to reduce costs and enhance their competitive position in the market. Saudi retailers are constantly searching for new products, and often request support from the suppliers for product promotion and advertising.

Product advertisement is a necessity to win Saudi consumers. Competitive pricing, weekly promotional offers, as well as offering advertising support are key elements in a successful strategy for a new – to-market product in Saudi Arabia.

Hypermarkets were first introduced into Saudi Arabia in 2004. They are very large -approximately 200,000 square feet or 18,580 square meters – and have up to 50 checkout counters.They usually carry over 50,000 items including food, clothing, tools, toys, and electronics. In 2016, there were Approximately 224 hypermarkets (an increase of 8 outlets from 2015). They are mostly located in the three major cites of the Kingdom (Riyadh, Jeddah and Dammam). Hypermarkets accounted for approximately 11 percent or Approximately $4.5 billion of the total retail food product sales in Saudi Arabia in 2016. Some hypermarkets such as LuLu, Danube, Hyper Panda, Carrefour,and Othaim directly import some of the food sold in their outlets. In November 2016, LuLu established a food processing and logistics operation in New Jersey to purchase, process, and re-label U.S. food products to LuLu Hypermarkets worldwide.

Convenience stores,commonly referred to as bakalas, are found in every neighborhood. They have a floor size of up to 100 square meters. Bakalas have limited access to distributors. They deal on a cash basis and purchase most of their stocks from wholesalers -except for a few fast moving brands that are delivered by importers. Despite the growing number of modern supermarkets in Saudi Arabia, the food -retailing role of bakalas continues to be important. In 2016, there were an estimated 38,416 bakalas, an increase of approximately 3 percent over 2014. Bakalas accounted for 50.4 percent, or approximately $19.6 billion, of all food products sold by retailers in 2015.

Prices in Bakalas tend to be high, but they maintain an advantage over supermarkets by providing services to shoppers looking to quickly buy a few items.
Women in Saudi Arabia are not permitted to drive and depend on bakalas
within walking distance of their homes. Also Bakalas are very important to third country nationals working in the Kingdom who do not own automobiles. Most compounds housing expatriates contain one or more of these corner grocery stores. Bakalas stock many U.S. consumer-oriented products, and most have refrigeration and the capacity to store frozen foods. In addition to corner grocery stores, there are hundreds of ethnic stores in the Kingdom, catering to Indians, Pakistanis, Filipinos, and other Asians.

Foods from many parts of the world are found in the Kingdom. Unlike large retailers, bakalas offer credit services to neighborhood customers who can pay at the end of each month. These small retailers also provide home delivery services for groceries worth as little as 10 Saudi riyals ($2.67). The bakalas use motorbikes to deliver groceries to neighborhood customers.