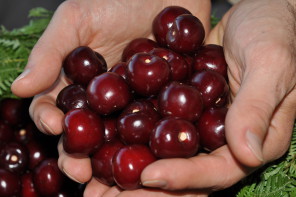 “The Chilean cherry season begins in October and lasts about a month and the market price is up about 30% over the same period last year,” said Mr DeChao Wang, manager of the QingDao Xiang DeFeng business Trading Co.Ltd.

The arrival times for the imported cherries will vary according to the mode of transport – air cargo will arrive in China by the end of November and marine cargo usually will arrive by the end of December to the beginning of January.
There are two main reasons for the price rise and the surge in the market demand. First is their unique high quality which has boosted their popularity. Secondly, increased year by year demand for the fruit has interested many domestic investors who are going to Chile to make large contracts with orchards there and then indulging in market speculation.
The Chilean cherries imported by our company will be sold to the wholesale markets in first tier cities, such as the JiangNan market of GuangZhou, the HuiZhan market of ShangHai and many others. Unlike many importers who have a single import business, we have our own wholesale market as well as the super market, thus ensuring the smooth flow of the sales market.
Mr DeChao Wang
Manager Qingdao XiangDeFeng Buiness Trading Co.Ltd
Fuente: www.freshplaza.es
(Visited 11 times, 1 visits today)
VOLVER A NOTICIAS