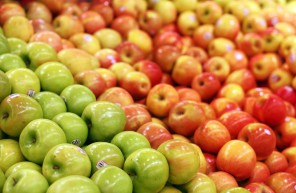 “Benefitting from the growing consumption demand in China, the Yuanxing company imported and sold 15% more fruit than in the same period last year. Also the range of apple varieties has increased. At the same time we also acquired sales rights for multiple exclusive apple varieties. When it comes to pricing, we find that consumers are more keen on finding cheap fruit and Chinese fruits have a low price. The combination of these two factors make the price of imported fruits go down as well,” says Mr. Lu from Yuanxing Fruits in Shenzhen.

Downward pricing trend for imported fruits
“Challenges and opportunities live side by side on the fruit import market. On one side, the Chinese market is opening up to more and more imported fruit, so foreign cultivators generally have a favourable attitude towards the Chinese market. Chinese consumers are also becoming increasingly familiar with imported fruits, so the market demand is growing. From the other side, the exchange rate between RMB and foreign currencies continues to be unstable. Importing costs also keep going up and consumers don’t want to spend as much as before on fruit due to economic circumstances. Overall, the sales price for imported fruits is showing a downward trend, which puts a big pressure on the import market. In those circumstances, we mainly adopt the approach of penetrating several layers of the sales market, selecting special varieties for a promotional plan end providing customised varieties and services to our clients.”

Sales of imported fruits on the rise
“If we compare with fruits produced in China, imported fruits are for the greatest part cultivated and processed in a standardised way and they are commercialised to a high degree, with perfect cold chain logistics that reduces losses to the absolute minimum. The imported fruits are of high and stable quality and because they are produced on a large scale, the production costs are low. Then there is the supply of the sales season in the Southern hemisphere and special production regions such as those for tropical fruits like durian. These supplies complement the gaps in the varieties and supply seasons here, so they allow consumers to enjoy any fruit at any time of the year. It is exactly the advantages of the stable quality and supply delivery of imported fruits that have made consumption volumes in China rise gradually over the past years.”
“Yuanxing mainly operates in apples and different kinds of pears. We also cooperate with dozens of packaging companies to process seasonal products like grapes, tangerines and melon-type fruits. We also have a longstanding and close cooperation ongoing with cultivation bases that cover a total of more than 666 hectares. We have already been importing several fruit varieties from everywhere in the world for more than 10 years. We mostly transport our products over sea. Some special products, like Australian and New Zealand cherries, early-ripe cherries and blueberries, are transported by plane. We mainly operate through the harbours and airports of Hong Kong, Shekou, Yantian, Canton and Yangshan in Shanghai.”
“The sales of imported fruits by Yuanxing is done through self-operating businesses or sales on commission in first-tier, second-tier and third-tier cities in the whole of China. And with our many years of being operational, we have shaped a professional operation structure for shops and supermarkets services, wholesale, retail and online shops.”