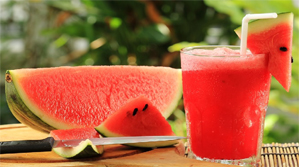 l-Citrulline is a nonessential amino acid precursor of arginine and indirectly a precursor of nitric oxide (NO), which is a vasodilator and increases mitochondrial respiration. On the other hand, the antioxidant pomegranate ellagitannins are precursors of urolithin A, which has been associated with mitophagy and increased muscle function. To elucidate if a single dose of watermelon enrichment with these compounds could have a positive effect after high-intensity exercise (eight sets of eight repetitions of half-squat exercise), a double-blind randomized crossover in vivo study was performed in healthy male subjects (n = 19). Enrichment juices maintained basal levels of blood markers of muscle damage, such as lactate dehydrogenase and myoglobin, and showed a significant maintenance of force during the exercise and a significant decrease in the rating of perceived exertion and muscle soreness after exercise. A positive effect was observed between l-citrulline and ellagitannins, improving the ergogenic effect of watermelon juice.