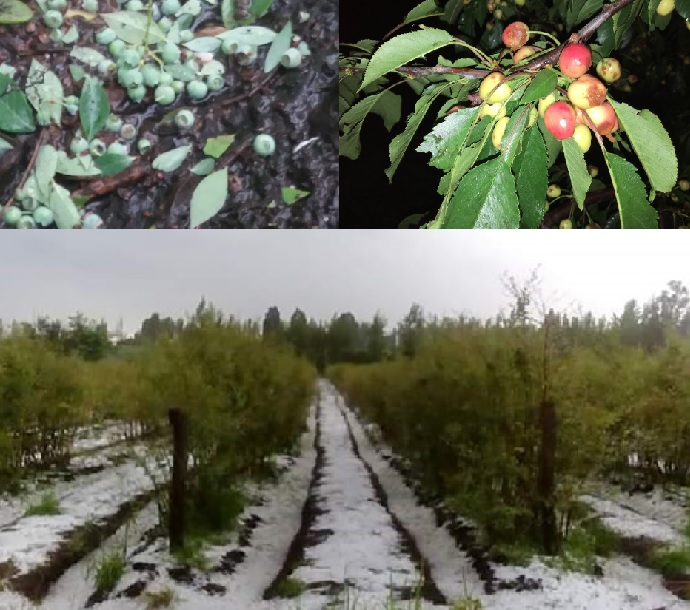 Cherry and blueberry exports could fall by 5% to 8% due to the hail that affected the crops, especially in the VI and VII Regions, last week. Even though there were farmers and exporters who lost everything, most experts emphasize that the hail affected certain areas more than others, although they recognize that they have to wait to see the final impact.

“The hail can affect a producer and not his neighbor. It is different from the rains or the frosts that affect continuous areas”, said Hernan Garces, the president of Garces Fruit.

This is why, producers have been asked to be prudent.

“We must measure the impact, so that we do not generate the feeling that this was a complete catastrophe. It was very serious in some specific local areas, it was very localized, but it is not a catastrophe for the entire Chilean fruit sector. This won’t impact more than 5% of the country’s total volume in plums, cherries and nectarines,” stated Max Donoso, the president of Coagra and Banagro.

Carolina Dosal, the president of Fruseptima, had a similar opinion. She stressed that the damage in that region affected certain areas, and insisted that they had to wait to measure them.

Regarding cherry exports, China would be the most affected market, as it accounts for 80% of the total shipments of this fruit.

However, according to the president of Asoex, Ronald Bown, “the export volume decrease will be similar to the estimate (-5%). This could also happen in blueberries, whose main market is North America. We still can’t speak about other species.”

In cherries, a 5% decrease in exports amounts to nearly 1.5 million boxes less than the estimated 36 million for this season.

Andres Armstrong, of the Blueberry Committee, said the impact would be between 5% and 8% in fresh blueberry exports.

“One thing is production and another thing is the export of fresh blueberries. Suddenly we have damaged fruits that don’t qualify for export and that remain in the domestic market or are marketed for the frozen segment.”

Felipe Garcia-Huidobro, the president of Frusexta, said the problem could last longer than just this year, as the hail may have affected the plants significantly.

“The trees are absolutely stressed, they were left without leafs and the branches were hit violently and that impact generates an internal wound,” says Garcia-Huidobro.