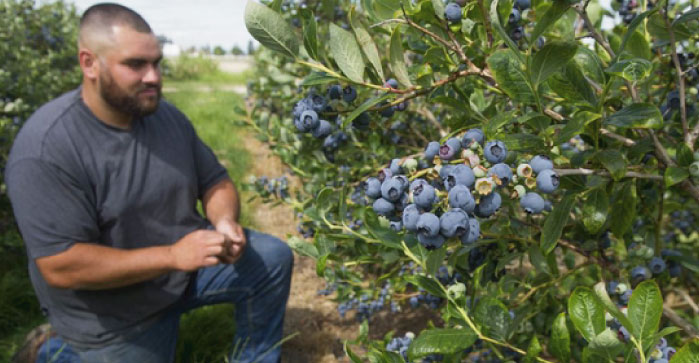 Poor weather and labour shortages are hammering B.C.’s blueberry growers who are dealing with lower yields and a workforce reduction of more than 50 per cent this year.

“In all my years, I have never seen a year like this,” said Abbotsford blueberry grower Parm Bains, who began farming in 1989. “To have bad weather plus this labour shortage … is not something we have ever had to face.”

Bains said farmers are trying to share workers, helping out those who are unable to find anyone to pick their berries, but “it is really tough.”

“With people not wanting to work because of CERB or concerns about the virus, plus fewer seasonal agriculture workers, the industry is really struggling,” said the owner of Westberry Farms.

Cool weather in spring and early summer negatively impacted pollination, while high water levels in the Fraser River caused flooding and seepage in many low-lying fields. The one-two punch will likely mean a smaller yield, although it’s still unclear how much less.

“I am also concerned there could be issues with the quality of the fruit from the excessive rainfall,” said Smith.

With more than 25,000 acres in production across the province, the blueberry industry’s need for labour is significant, said B.C. Blueberry Council executive director Anju Gill. The reduction in the workforce could be more than 50 per cent, particularly for hand-picking.