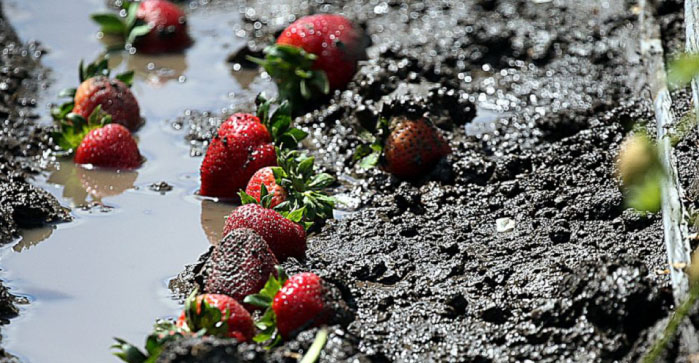 With Valentine’s Day right around the corner, U.S. strawberry supplies are down significantly so far this year creating a demand-exceeds-supply situation and an f.o.b. price on California strawberries in the low $20s. A slower start to the deals in both California and Florida as well as some winter rain in Southern California have created the short supply situation.

A look at the volume report put out on a daily basis by the California Strawberry Commission showed that through the month of January, there were about 6.8 million flats of strawberries produced in California and Florida, compared to 8.6 million in 2020. That represents a 20 percent decrease. California shippers were down 10 percent, while Florida producers had sent more than 25 percent fewer strawberries to the market this year. Mexico’s strawberry volume to the United States was off about 5 percent.

While California is by far the leading supplier of strawberries on an annual basis, Mexico and Florida chip in a significant volume early in the calendar year. Winter weather almost always plays an outsized role in determining daily volume during first few months of the year.

Carolyn O’Donnell, communications director for the CSC, said short supplies from California for Valentine’s Day are not unusual as rain often hits the Southern California growing districts in January and early February resulting in an inconsistent production schedule. California was hit with strong winds and heavy rains over a two-week period in late January.

“The winds were worse than the rain,” said Anthony Gallino, vice president of sales for Bobalu Berries in Oxnard, CA. “Oxnard had recorded gusts of over 100 miles per hour a couple of weeks ago. Throw in a few inches of rain last week and we’re in short supply.”

Speaking to The Produce News on Tuesday, Feb. 2, Gallino said there was quite a bit of scarring on the fruit picked the last week of January “so we had to send a ton of fruit to the processors. We are still working through it but by the end of this week, we should be back to normal.”

He predicted that within 10 days to two weeks, Oxnard producers would be firing on all cylinders and volume would ramp up quickly. Rather than blame the rain for the temporary drop in production, Gallino welcomed it. “We need the rain in all areas,” he said. “We need the rain for plant growth, and we haven’t had a lot of it this year.”

He said Oxnard should have good volume by the middle of February with Santa Maria following suit by the last week of February or the first week of March.

California Giant Berry Farms Director of Marketing Kyla Oberman agreed that the rain was a welcome sight for most strawberry growers. Near the company headquarters in Watsonville, she said growers were celebrating the healthy dose of rain they received. Watsonville will not be in production for a couple of months so the rain is only a positive. Even in Oxnard, she indicted the positives far outweigh the negative of a temporary decline in supplies.

Oberman said the industry has been running about a week behind normal since the beginning of January with the first spike in volume expected the week after Valentine’s Day. “We had always projected the first peak harvest week would be week 8 (Feb. 15-21),” she said.

In fact, she said volume is beginning to ramp up this first week of February and should continue unabated into May, barring any major weather issues. Oberman said Cal Giant is able to fill its Valentine’s Day orders but it will not have any extra strawberries for that period. She noted that blueberries are coming on strong and do appear to be the berry promotional alternative for that February holiday. But starting in mid-February, she said strawberries should offer promotional opportunities for many months on end.

The commission’s O’Donnell said California strawberry acreage showed a slight uptick this year, which means excellent volume ramping up in March and most likely reaching peak levels in mid-May when shipments are expected to top nine million trays per week. She said there should be many weeks above seven million trays in that April-May-June time slot.