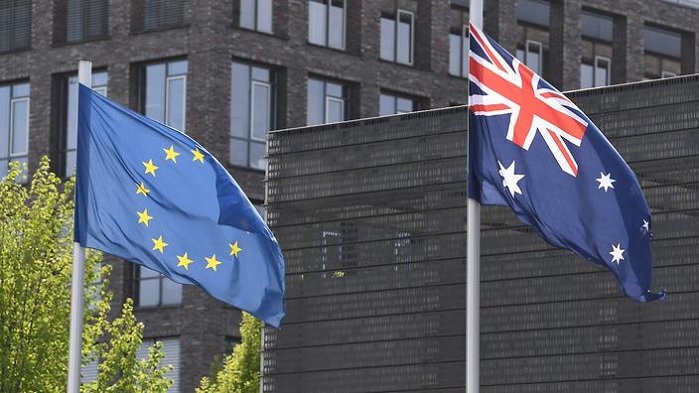 The European Union will begin drafting a free trade agreement (FTA) with Australia and New Zealand in July, the EU trade commissioner has revealed.

In an exclusive interview with SBS News, Cecilia Malmström said she will travel to Australia in June to “politically launch” talks with Trade Minister Steven Ciobo, and the “technical work” will kick off in July.

The Australian flag and the flag of the European Union are seen during an event at the German Ministry of Defence in Berlin, Sunday, April 22, 2018.

We will be working as quickly as possible, but I can’t tell you how long it will take,” she said.

Ms Malmström told SBS News the FTA will be mutually beneficial for Australia and the EU.

“Australia will have access to the EU single market and 500 million people,” she said.

“We will be looking at facilitating trade in all areas – in goods and services, public procurement. We will also be talking about sustainable development, about energy, about regulatory cooperation. So getting away with most hindrances that are between us today.”

The trade commissioner added that the FTA will ensure the EU has a presence in the Asia-Pacific region.

“Australia, like many other countries, have gone into this renewed TPP (Trade-Pacific Partnership). It is important for us to show that we are present in the region. So it is a strategic decision as well,” she said.

Ms Malmström said the announcement’s timing had nothing to do with Brexit.

“We prepared these negotiations long ago and there is a moment now when we are sort of appearing to be a circle of friends who do believe in multilateralism, in good trade agreements,” she said.

“And of course, the EU and Australia share so many values and have so many things in common: history, language, and you’re even in Eurovision now. So it’s high time that we also have a trade agreement between us.”

The European Commission on Tuesday confirmed news of the FTA negotiations, first revealed by SBS News.

“The Commission welcomes today’s adoption by the Council of the negotiating directives for free trade agreements with Australia and New Zealand. The preparations – which included an impact assessment for both agreements – are now complete and formal negotiations can begin,” the commission said in a statement.

Plans for “fast-tracked” FTA negotiations were announced by European Commission president Jean-Claude Juncker during his annual state of the union address to the European Parliament in Strasbourg in September.

President Juncker expressed a desire to complete negotiations and secure a deal before the next European elections, which will take place in May, two months after Brexit.

While the European Commission had expected the European Council to greenlight talks before the end of last year, SBS News understands talks stalled at the leaders’ level after France, Ireland and Belgium raised concerns about “the reciprocity” of any agreement.