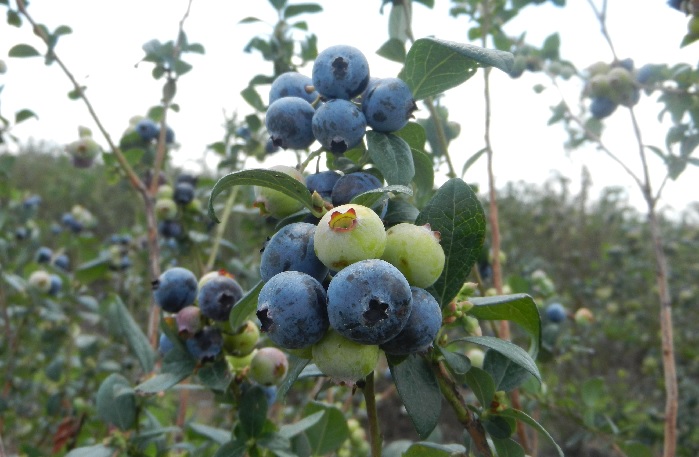 David Hill, owner Southern Hill Farms near Clermont, for example, expects his commercial farm to produce about 220,000 pounds this year. That’s about 30,000 fewer than last year on his 40 acres, which include a U-pick operation.

“Irma was bad,” said Hill, describing how he lost about 2 acres’ worth of blueberry plants. “We were predicting really high numbers [of blueberries] this year, but the numbers are going to be lower. … Across the board, we figure about a 10 percent loss.” Because of price fluctuations throughout the season and other costs related to bringing blueberries to market, he said it’s difficult to gauge the monetary loss caused by the damage.

With the decline of citrus, blueberries have become a booming alternative crop in the Sunshine State. The Florida Blueberry Growers Association had projected a 35 percent increase this season on top of a similar increase last year. Then Irma blew through in September, putting a crimp in the upward trajectory for the “superfood” that ranks highest among fruit for antioxidants.

“We were predicting to produce about 27 or 28 million pounds this year, but we think it will be closer to 19 or 20 million pounds again this year,” said Brittany Lee, president of the Florida Blueberry Growers Association.

While local growers say their crops will be down, the statewide prediction is still on track to match last year’s harvest of just over 20 million pounds, according to the association.

The Florida Department of Agriculture and Consumer Services estimated that the state’s total agriculture losses — including citrus — related to the storm could eventually reach $2.5 billion.

Besides damage to blueberry plants caused by Irma, the state also experienced a winter with wide fluctuations between cold temperatures and hot weather, Lee said.

“That wasn’t good for pollination,” she said. “That’s going to affect blueberry production.”

Central Florida blueberries start ripening by mid-March, and the season generally ends by the end of May when Georgia blueberries enter the market.

Scott West, co-owner of Tom West Blueberries in Ocoee, checks on his crop on Thursday, April 26. (Joe Burbank/Orlando Sentinel)
In Orange County, Irma’s winds tipped over blueberry trees on roughly 10 acres at Tom West Blueberries, a family-owned commercial and U-pick farm, said Scott West, who runs the farm with his sister and father.

The trees survived, but he expects his harvest to drop from the average of 10,000 pounds a year to 7,000 pounds.

“The labor of staking the trees back up is going to cost us,” he said.

West said Irma blew off the top leaves and branches of about 50 percent of his evergreen blueberry plants at the farm on Orlando Avenue next to Ocoee Elementary School.

“That means that they will bloom later,” delaying picking the berries by nearly three weeks, he said.

“We lost a number of [blueberry] plants from trees landing on them,” she said. “But overall, we are OK. The plants had wind damage but they appear to have recovered.”

Plenty of good eating — Harvested berries at Tom West Blueberries are ready for sale. (Joe Burbank/Orlando Sentinel)
Melanie Rose, owner of Sand Hill Blueberries off State Road 44 in Lake County’s Cassia community, said she expects a smaller number of berries for her customers to pick because of Irma.

“The plants had some leaf loss, and that is affecting the crop,” she said. “I would say our production will be down.”

At the Tom West farm, U-pick customer Melanie Williams of Orlando didn’t notice damage to plants as she filled a container with blueberries last week.

“I’m seeing so many blueberries here today,” she said as she reached up to pick off a few berries from the top branches. “But it’s unfortunate for these growers. Hurricane Irma seems to have affected just about everything.”