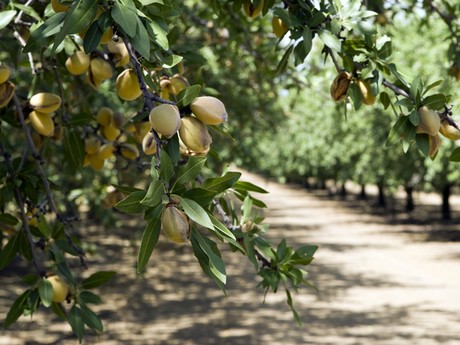 Being a grower in California is hard enough what with all the uncertainties that come with farming, said Richard Waycott, president and CEO of the Almond Board of California (ABC).That’s why the ABC has invested $4.8 million this year alone to projects that will improve almond farming practices that revolve around irrigation, pollination, coproduct utilization and more.

Since its inception in 1973, the ABC has invested $70 million to such projects, helping growers to keep crops thriving and supplying an ever-increasing demand for almonds.

Waycott estimates there will be a 30-percent production increase due to demand by 2021-22. Currently, the industry is growing by 6.6 percent each year.
“We’ve been on a continual growth curve for many years, with plateauing now and then,” Waycott said. “We’ve been through periods of growth similar to this in the past. We previously had 6,500 growers, and now we have 6,800 growers.”

There are 1.3 million acres of almond orchards in California. Of those, 1 million are bearing nuts, while about 300,000 acres are not quite ready to bear. Waycott said it takes about six years for a tree to be ready for full production.

The increased demand for almonds is coming from consumers seeking healthier options in their foods. Snacking is the largest market for almonds, while almond milk usage comes in second. Sixteen percent of the 2.25 billion pounds of kernels harvested are kept in the U.S. for almond milk production.

Overseeing ABC’s sustainability projects is research to help streamline the process. In 2015, Accelerated Innovation Management (AIM) was created to help growers and handlers meet their needs, while benefitting the communities and environments where the crops are grown.

Four areas are focused on with AIM, which are water management and efficiency, sustainable water resources, air quality and 22nd Century agronomics.

On the water management side of things, Waycott said that the most important thing for growers is just making sure the water is available.
“It’s really just having water [assuredness] and reliability year to year, not just how much is available,” Waycott said. He went on to say that though the twin tunnel project would be an improvement in water delivery systems, it comes down to more than that. “It’s really more trying to get an understanding with State and Federal agencies that come to a conclusion on water administration.”

The biggest challenges facing the almond industry come from the areas of water and soil health, areas that Waycott said the ABC is looking to solve with scientific pursuits. However, it always comes back to sustainability. Growers of about one-third of almond orchards have adopted the ABC’s sustainability programs, Waycott said.

According to materials provided by the ABC, “groundwater is a vital resource … held in underground aquifers that are collectively California’s largest water storage system.” That ground water is responsible for crop irrigation and providing household water.

The ABC launched an initiative to see what extent almond orchards could be utilized to replenish underground aquifers. Of the 1.3 million acres dedicated to almond orchards, 675,000 have soil that is suitable for groundwater recharge.

Nick Blom, a Modesto-based almond grower with 650 acres, is one of the farmers who believes the groundwater recharge will help perpetuate the crops for years to come.

“These aquifers are a shared resource between farmers, families and business, so the act of replenishing them through recharge brings benefits to a much wider community, including cities and urban areas,” Blom said in a statement issued by the ABC. “My hope is that when the next drought comes, we will have made fundamental changes to our water infrastructure for the better.”