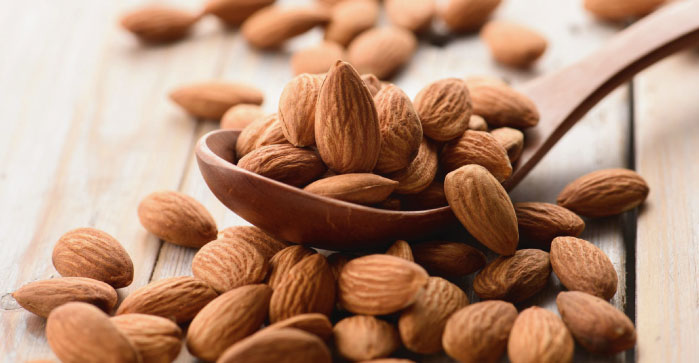 Almond production in California, the world’s biggest producer of the nuts, is expected to drop 10% to 1.3 million tonnes (2.9 billion pounds) this year because of high temperatures and drought. The return of La Niña conditions could bring another weak crop next year as well.

The crop shortfall threatens to drive almond prices sharply higher, with some growers expecting a price jump of 50% or more from last year’s $1.83 per pound. That would hit many packaged food companies that rely on almonds for a wide variety of chocolate and other snack products. In addition, almond milk is the preferred dairy alternative in the US, with those manufacturers likely to see margin pressure and consumers possibly seeing higher prices.

Almond prices’ last big spike, to $4 per pound, occurred in 2014 in the wake of another deep California drought.

California grows virtually all the almonds raised in the US, and accounts for 79% of global supply. Australia is the second-biggest producing country, but production gains there failed to offset declines in California, and global almond production is expected to decline by 8%, according to USDA estimates.

Rainfall in California’s almond-growing regions from March through June, the period when nuts are maturing, was 74% below the 10-year trailing average, while the average temperature was 11% above average, according to Gro’s Climate Risk Navigator for Agriculture. The Gro Drought Index shows extreme levels of drought in key growing areas during the summer. The harsh growing conditions reduced nut set per tree by 18% and kernel weight by 3%, even as almond acres increased by 6%, according to the USDA.

As California has been hit by repeated droughts in recent years, almond growers have increased irrigated acreage while decreasing the number of non-irrigated acres.

The US Climate Prediction Center recently announced that La Niña conditions have returned for a second year in a row and says the chance of it lasting through the North American winter is nearly 90%. La Niña tends to bring drier than normal conditions to the Western US, which could put almond groves in California’s Central Valley in a precarious position.