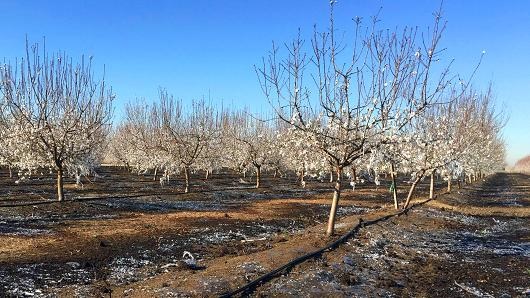 A cold snap in the heart of California’s agriculture industry could be devastating to the almond crop and ultimately lead to higher prices.

It follows three-straight nights of bitter-cold temperatures this week in the San Joaquin Valley — the hub of almond production — where temperatures sank to the low-20s overnight starting Tuesday. Almonds are in full bloom and vulnerable to frost damage that could wipe out future nuts on the trees.

“I think it’s going to be significant, but we’re not going to know the extent of damage for some time,” said Bill Dietrich, who farms almonds in the Central Valley. “We’re at full bloom, which is not the most sensitive stage but it is a sensitive stage.”

Higher prices possible
If the crop is damaged, there could be a reduced supply available on the market and that could mean higher prices for consumers and food manufacturers.

Almonds are a lucrative crop with more than 1 million acres of the nut trees planted in California, mostly in the San Joaquin Valley. The state produces about 80 percent of the world’s almond supply.

On Tuesday, the Blue Diamond Growers cooperative of more than 3,000 California almond growers warned that “all almond varieties are at significant risk of loss when overnight temperatures reach 28 degrees and below.”

Officials said there also is chance of damage to other crops, including deciduous tree fruit such as peaches, plums and nectarines as well as some citrus. Regardless, they said the extent of any damage may not be fully known for weeks or months since blossom damage to trees typically takes time to show up.

“Most likely there’s going to be some damage from the current weather situation we’re going through,” said Fresno County Farm Bureau CEO Ryan Jacobsen. “It’s just unknown how extensive it’s going to be.”

Farmers take precautions
Low temperatures were recorded as far north as Chico and down near Bakersfield in the state’s Central Valley. Some almond growers took precautions by using wind machines or sprinklers to protect the blooms from frost and freezing.

The weather service recorded temperatures as low as 23 degrees Tuesday in some key growing counties and 25 degrees on Wednesday; upper-20s were common Thursday.

However, Friday morning brought some relief with cloud cover helping to keep temperatures out of the danger zone. However, the National Weather Service said a freeze watch remained in effect from Friday night through Saturday morning in parts of the Central Valley.

“Sub-freezing temperatures are possible,” NWS warned, adding “these conditions could kill crops and other sensitive vegetation.”

In terms of crops in California’s $45 billion agricultural industry, nuts (including almonds and walnuts) rank first in value and then grapes. The $6 billion nut business employs more than 100,000 people in the state.

Citrus at risk
Another key agricultural commodity in the region is citrus, a $3 billion industry employing more than 20,000 full-time workers. Roughly half of the navel orange and mandarin crop is already harvested in the Central Valley but the warm temperatures in January and early February caused citrus trees to bloom a few weeks before they typically do, so the early growth is now vulnerable to frost damage.

“Where we might see some damage, and we’re watching for this, is on the new growth,” said Alyssa Houtby, a spokesperson for the California Citrus Mutual, which represents more than 80 percent of the state’s citrus industry. “If there’s any significant damage to a majority of that bloom that’s on the tree, we might see an impact to next year’s crop.”

Meantime, any significant damage to crops could lessen the farmworker shortage in the Central Valley this year but also have ripple effects on the local economy that depends heavily on agriculture-related employment.

Jacobsen said last year was “an extraordinarily tight year” for farm labor supply in the Central Valley and arguably the tightest the region has seen in a decade. “The damage to crops is going to probably be more of a dictator of what kind of labor is needed for this year,” he said.